How To Choose The Best Snowboard for the East Coast 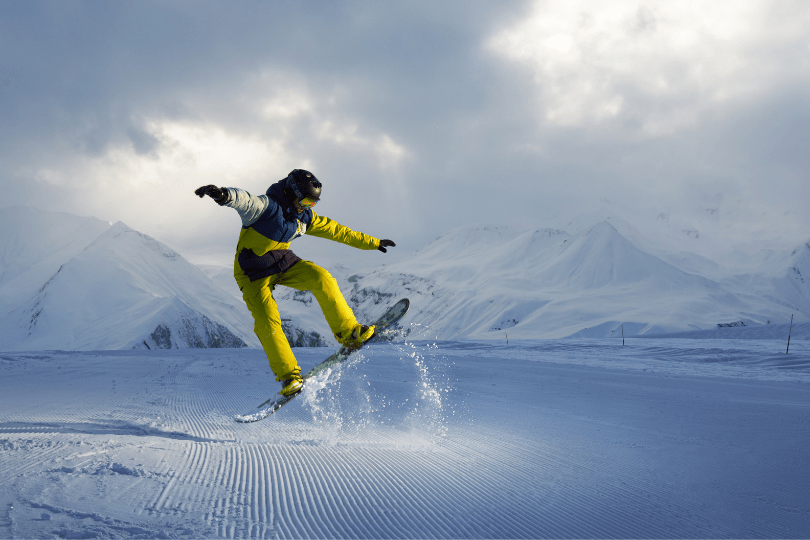 “Ice Coast” is commonly used to refer to the U.S East Coast for snowboarding, and for good reason. A combination of humidity, low elevation, and weather conditions create hardpack and often icy snow conditions.

Snowboarding here requires carving through concrete snow, and if you think your board will work fine because you can ride icy groomers, think again. This snow is tough and requires a specific board (and riding style) to make the most of it.

The best snowboards for the East Coast are those that offer extreme edge hold and technical precision on hard snow. Typically, a traditional camber or hybrid rocker profile with serrated knife-like edges, combined with a stiff flex and a bit more weight, is best for such icy conditions.

From as far South as North Carolina up North to Maine, the East Coast has some popular ski resorts such as Hunter and Titus Mountain in New York, Mount Snow, Stratton and Killington in Vermont, Whiteface in Lake Placid.

East Coast resorts are generally located at relatively low altitudes (1000- 4000 feet) and are in close proximity to the Atlantic Ocean.

Most of the time they offer hard and icy conditions. The humidity from the ocean combines with the falling snow to form a more wet and dense snowpack surface.

Snowstorms are not as common on the East Coast. The top layers of the slopes tend to melt and refreeze over and over, forming ice crusts that get more compact over time.

The mountains are also a lot smaller on the East Coast, making the slopes shorter, narrower, and more horizontal in comparison to the West Coast.

Because of the lower elevation and smaller mountain ranges, there isn’t nearly as much opportunity for backcountry riding as on the West Coast.

It’s unlikely a short snowboard trip will coincide with one of the Ice Coast’s rare winter snowstorms. Even if you get lucky, a powder day on will generally look more like a dusting on a West Coast resort.

With especially hard groomers, you’ll need a board with effective edge hold and stiffness to handle ‘Ice Coast’ conditions.

If there’s anything your board should be designed to do, it should be stable on groomers.

Since almost all runs are groomed daily, you’ll need a board that is heavy, stiff, and stable, allowing you to ride at high speeds without causing too much vibration.

The ideal board would be a directional camber that has a specified tail to help grip your board into the hard snow. A longer and narrower shape, combined with a stiffer flex, gives you more confidence for racing down icy slopes.

It’s important to pick a board with extra-strong edge hold for icy days.

Boards with a magne-traction serrated edge technology or with raised contact points that are designed to cut and grip into hard snow will make a big difference on hardpack snow.

Having a longer board with an extended effective edge (the edge that makes contact with the snow) adds stability and makes the board feel more rigid.

A combination of a magne-traction edge hold with a traditional camber profile underfoot is a great option for riding groomers – which are pretty much all you can ride on the East Coast.

If you want stability and edge performance, a camber profile is a great choice and will grip into hard snow with ease.

If you’re more advanced and plan to spend time riding switch or in the park, a hybrid rocker true-twin can also be an acceptable alternative for East Coast conditions.

A hybrid rocker profile is not as grippy as camber but offers a looser feel for faster turn initiation and quick edge to edge response on groomers.

Often, the most fun you’ll have on the East Coast is when bombing down hills at speed. If you’re after speed, you’ll want a stiff board with torsional and horizontal rigidity.

The stiffer the board, the more stable and fast you’ll be able to carve on hard snow.

Alternatively, if you’re a seasoned expert and prefer cruising through the park, you may prefer a medium flex that will allow you to butter and jib easily. This is a less common choice for East Coast resorts though.

With these aspects in mind, let’s look at 4 top snowboards for East Coast riding.

The T. Rice Pro is a true-twin hybrid rocker with a centered stance. While many rocker profiles are considered loose on ice, the T Rice Pro combines its banana technology profile with technical edges and a heavy base to make up for the lost edge hold.

This board is suited for advanced to expert aggressive free riders who like to take on hard tracks with speed.

It has a medium-stiff flex rating (7/4) and a sintered base that helps add stability when racing down icy slopes.

The T Rice Pro has magne-traction edges that provide excellent edge hold on hardpack mornings while keeping you stable through chopped-up icy afternoons.

These edges, which Lib Tech claims “turn ice into powder”, allow for fast turn initiation, is ideal for riding through tight tree lines.

The East is named after the coastline it shreds the best and is a genuine rocket ship in hard conditions.

It has an extended hybrid rocker profile with a super long effective edge (for a rocker), giving the board a stable yet technical feel and allowing for aggressive turning.

This hybrid profile offers quick turn initiation, yet is best for advanced and expert riders and might feel a bit lose on icy snow for an intermediate rider.

If you plan on spending a decent amount of time in an icy East Coast park, this rocker profile will suit you well.

The board has a super stiff flex (9/10) which lets you carve the rails through icy snow like a knife.

It’s an excellent board for speed, carving, and turning and will feel stable and powerful on the hardest possible snow conditions.

The East is Never Summers’ most stable and damp board and does well to manage icy chatter at high speeds.

It feels heavy and solid and with such an extended effective edge, holds an edge better than any other Never Summer board.

The Burton Custom is a highly forgiving East Coast board for intermediate to advanced riders.

It’s an all-mountain directional board with a slightly longer nose than tail. This helps for cruising over crushed ice and choppy hardpack, while the dedicated tail helps grip the board into the snow for stability.

It has a traditional camber profile which helps to equally distribute the weight of the rider over a continuous edge from tip to tail.

With a perfectly symmetrical medium twin flex rating (6/10), the Custom offers a happy medium between playful and technical.

This makes for a balanced ride whether you choose to ride regular or switch, on groomers or in the park – although riding switch on a directional shape takes a bit of getting used to.

With Burton’s dualzone EGD engineered woodgrain placed along both edges, the Custom offers solid edge hold and response, and feels easy to turn and control with precision on ice.

Although it lacks the aggressive edge hold technology of other boards, as long as you tune the edges and wax it regularly, it will cut through ice like a knife while maintaining a lot of pop.

The Mercury is a high-performance all-mountain board that can be ridden in powder as well as the park.

It’s a versatile option for those looking to ride both coasts on the same board.

It has a traditional camber profile with a raised camber platform to improve high-speed edge hold through icy, choppy, and groomed terrain.

With a flat kicked up angle at the tips, it allows riders to ride fast and aggressively transition from rail to rail.

With a medium/stiff flex rating of 6.5/10, the Mercury is a good mix between an aggressive snowboard and a more forgiving, intermediate-friendly board.

It has a directional flex which is stiffer at the tail than the nose. This allows the back of the board to cut into hard snow and maintain stability when carving through hardpack.

With a super long cambered effective edge, as well as sharp steel edges, the Mercury will fly down icy steeps with ease.

Designed with Capita’s death grip system, it has a third contact point between the bindings for better edge hold and icy carves.

While the above boards are often considered the best for East Coast riding, the following are additional valid alternatives:

The average intermediate East Coast rider will likely benefit from the stability and edge hold of a stiff traditional camber snowboard in icy conditions.

A narrower and longer board with a directional shape can further help increase stability on East Coast ice.

For advanced riders who like to leave knife tracks in their carving wake but also spend time in the park, a hybrid rocker profile with a medium-stiff flex can be good choice.