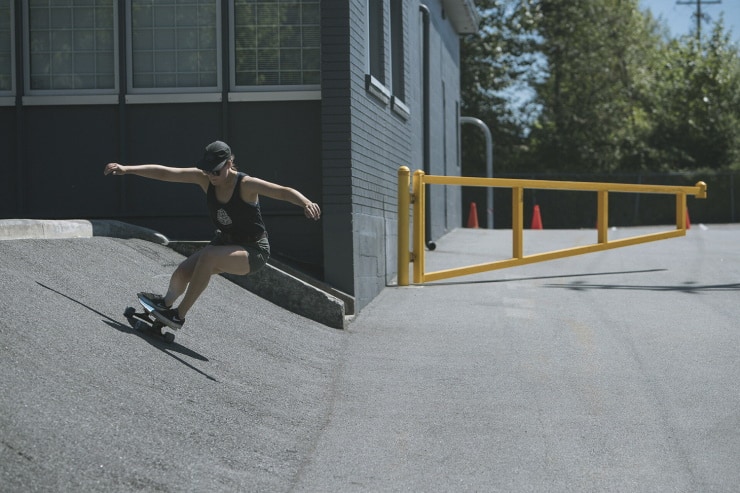 For us surfers and surfer wannabes, seeing a new quality surfskate hit the market is always a thrill. Landyachtz is undoubtedly among the best longboarding brands on the planet. But can their surfskates really surf?

Landyachtz’s surfskate cruisers, the Butter and Pocket Knife, provide a solid mix of surf-style carving and stability. You get a tight turning radius compared to regular longboards, yet they can be taken to higher speeds and are more trickable and poppable than most other surfskates.

At $200, Landyachtz’s surfskates are also more affordable than most quality surfskates out there (only Flow beats that price point).

Who are these Landyachtz surfskates for?

LY designed these surfskates with their existing customer base in mind – primarily skateboarders and longboarders. In contrast with other brands like Carver or Smoothstar, their target group is not hardcore surfers.

Their design goal is to allow riders to do tight turns and surf-style cutbacks while keeping the ability to slash on many kinds of terrain, from streets to park to bowl.

While they do offer tighter carving compared to normal cruisers, they also let you go fast and do tricks like on a regular cruiser.

In short, these two cruisers are closer to the skateboard end of the skate-surf spectrum (see this article). The ageless “carvability” vs stability tradeoff.

Typically, “hardcore” surfskates are too unstable for fast riding – unless you have very good skills – and not well-suited to street tricks. The front truck is usually way too loose, and the ride is too high off the ground.

Of course, some surfskates are better than others for tricks and speed. Slide and Carver C5 work well for skatepark. Going fast or high on a Swelltech or a YOW, on the other hand, would be suicide.

The Landyachtz Butter and Pocket Knife are a very good compromise between a normal Landyachtz cruiser and “hardcore” surfskates like YOW or Smoothstar. They carve well but retain good stability.

So if you’re a skateboarder/longboarder looking to dip your toes in the ocean without abandoning your beloved concrete hills and skatepark, these boards may just be for you. Plus, they’re “only” $200.

The Butter has a classic surf-inspired cruiser shape with a full outline: rounded nose, slightly tapered diamond-shaped tail, decently wide aspect. The 9″ width for a 31″ length gives it a comfy look and feel.

The 15″ max wheelbase is relatively short compared to a similar length Carver (17″+). This helps the Butter be more responsive and turny, but at the expense of stability at speed (although trucks also come into play, keep reading).

The concave is described as “mellow” but is actually quite on the flat side, similar to a Carver or YOW. A flatter deck gives you freedom of movement for surf footwork – like on a surfboard.

That said, low concave (and no wheel flares) means less foot lock-in, something you’d want for fast downhill. But hey, you can’t have it all. The deck does have a bit of rocker to keep your feet in place.

The kicktail is functional, over 5″ long (spacious) and with a slight taper. The tail angle is very mellow, making it adequate for snapbacks and reentries without getting in the way of flowy surf carves. The nose is basically flat.

The Butter comes in two versions:

The “Lines” word refers to the cool color lines that run along the full length of the deck on about half of its width, both on the Oak and Walnut versions.

Check out the Landyachtz Butter surfskate on Amazon

Compared to the Butter, The Pocket Knife has a more aggressive shortboard-style shape with a narrower nose and sharper, tapered tail.

While 1.6″ shorter than the Butter, it’s slightly wider toward the front before the nose, providing strong foothold near the front truck for high responsiveness in turns.

Compared to the popular Landyachtz Dinghy, the Pocket Knife is slightly longer and 1″+ wider, with a more shortboard-like outline.

Like the Butter, the Pocket Knife has a stiff and durable 7-ply maple construction. Most Surfskate decks are on the stiff side for optimal carving responsiveness, in contrast to other kinds of pumping and carving longboards.

The stunning FG Watercolor version, however, has a layer of fiberglass that gives it slight flex for better cushioning on rough terrain.

The Pocket Knife’s kicktail is similar to the Butter, relatively ample but with a very mellow incline – just enough for kick turns when slashing a driveway or a bowl, or for hopping on or off a curb.

This deck has a bit more concave than its big brother, with slightly raised edges that culminate around the wide point of the deck. This gives you good foot lock-in at this strategic spot when carving tight and when riding fast.

The Surf Life is the longest and widest of Landyachtz’s surfskate lineup, being about 1/2″ longer and wider than the Butter. It comes in two really sweet designs, Birds and Flippy.

This board has a very different shape than the Butter, however. While the latter has a classic shortboard surfboard type shape, the Surf Life has an 80s style pool board shape with a wide nose, wide tail, deep kick, and tapered “waist” for faster carves.

This shape is inspired from Landyachtz’s ATV Ditch Life which is designed specifically for concrete ditches, pool, and tricks. The Surf Life, though, has much less concave, a flat nose, and flatter kick to allow great freedom of movement for surf-style carving and snap backs.

Compared to the other LY surfskates, the Surf Line offers the most foot platform with comfortable nose and tail. If also has the largest wheelbase, which can be lengthened up to 17+” (vs 15″ for its siblings).

The long wheelbase combined with the tapered outline and roomy platform allows for faster and slashier surfskate styles, including in the pool, on street obstacles, on park ramps,, and in concrete trenches.

The surfskate truck setup on the Butter and Pocket Knife has the special Bear Banger surf truck in the front and a regular Polar Bear 155mm in the back.

The Banger truck is a high angle 9″ RKP bushing-based truck. It has a baseplate angle of 65º and comes with an extra riser pad that adds an additional 5º, for a total angle of 70º.

This high angle and high rake is what makes the Banger surftruck carve tighter than a regular truck.

The Banger truck doesn’t use springs but instead extra tall soft cone bushings that give it a lot of rebound in carves and pumps, similar to the Carver CX and Waterborne adapter – though the angles are not the same.

This is in contrast to spring-based surfkate trucks like the Carver C7, YOW, Swelltech, and Slide. Springs typically provide more dramatic swings and snap backs, but they also come with serious issues – looseness, breakage, etc.

Like on most surfskates, while the Banger truck provides snappiness and tight turns in the front, the “regular” angled Polar Bear RKP truck in the back keeps the board stable through good lean in hard turns, maintaining grip in the back wheels.

An important characteristic of a surfskate setup is to provide stability in hard turns at low speed. The high + normal angle combination front/rear is what gives the surfskate that extra stability when riding slow, compared to normal boards.

Both the Butter and Pocket Knife have an adjustable wheelbase (13″ – 15″). The shorter WB results in faster and bouncier pumps, while the longer one gives you more speed and deeper turns.

The Surf Life has a slightly different set up than the above two,, with a 130mm Banger RKP front truck and a 130mm Polar Bear truck in the back. The narrower surf truck makes for even snappier turns when combined with the wide and tapered pool shape of the Surf Life.

Both the Butter and Pocket Knife surfskate setups ship with 63mm Fatty Hawgs – the same wheels used on the Landyachtz Dinghy.

The Fatty Hawgs have a radius edge which makes for easier sliding when carving surf style.

The Surf Life ships with new 65mm surfskate-focused, square lipped Hawgs wheels. All the Hawgs wheels that ship with the surfskates completes have a glossy surface, vs stoneground on normal cruisers, for better smoothness and better grip in tight surf turns.

The Hawgs wheels are fitted with Spaceball bearings with built-in spaces that keep the wheels aligned and chatter free.

While the Butter, Pocket Knife, and Surf Life are carvier than a regular cruiser, they don’t feel nearly as surfy as other surfskates.

Spring-based surf trucks generally give you much tighter turns and a surfier feel. The bushing-based Carver CX also feels carvier and snappier in carves and allows for more radical cutbacks.

Pumping on the Landyachtz surfskates is fairly efficient if you have the technique – though not as effortless as on a C7 or YOW.

I’m personally used to pumping on the CX so the Butter feels relatively natural. The Landyatchz surfskates are harder to pump from a standstill though.

Like the Carver CX, these surfskates have a fairly big ride height. While pushing takes more effort, the extra height gives you more leverage for carving and pumping.

Overall, the Butter and Pocket Knife don’t immediately make for extreme surf moves such as radical snapbacks or tailslides in a driveway or a bowl. However, they are tighter turning and easier pumping than your normal cruiser.

The Surf Life, with its wide and tapered outline and longer wheelbase, is easier and more natural to take into radical maneuvers

A big plus with the Landyachtz surfskates is that they also let you do things you do on a regular cruiser (but typically not on a surfskate) such as riding faster (above 15 mph) or doing ollies and kick tricks. They are a lot more stable than most other surfskates.

In short, the Butter and Pocket Knife make great beginner surfskates OR hybrid boards for coupling some nice surf carving and pumping with everyday city slashing – all in one.