Pintail vs Cruiser: Which Has The Most Awesome Ride? 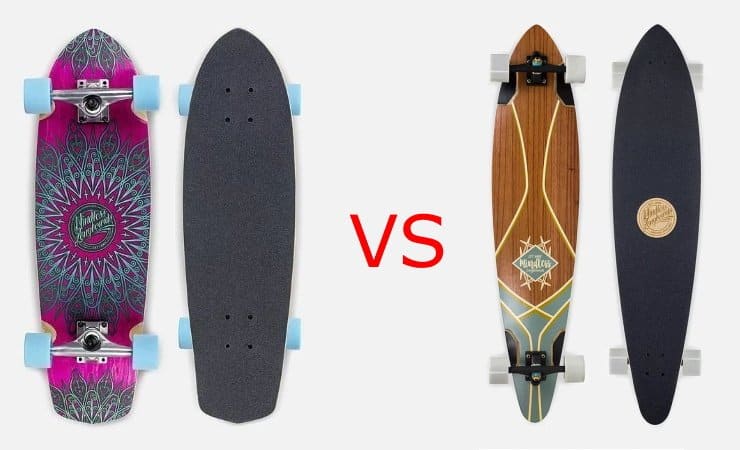 A question than comes up a lot is, should I choose a cruiser or a pintail or my longboard. Pintails and cruisers have very distinct shapes and characteristics that make for very different types of riding.

In short, pintails are generally designed for mellow cruising and carving along the beach or on bike trails, thanks to a longer wheelbase and flexy deck. A cruiser, on the other hand, is meant primarily for agile street riding and nimble turns thanks to a shorter, stiffer deck and a tail and/or nose kick.

Both pintails and cruisers can be good options for cruising, carving, and commuting. Both are generally topmount which makes them responsive in turns. The main difference is in the shape, size, and flex.

When it comes to city slashing and curb hopping, on the other hand, cruisers generally have the edge over pintails. Cruisers also tend to have more concave and rocker, while pintails tend to be flatter. As a result, some cruisers can more easily be used for freeriding.

For the purpose of this article, “cruiser” refers to short longboards with lengths 26″ – 35″ and a “cruiser shape”, i.e. a surfboard-type shape with varying nose and tail width and shape.

A pintail, like the name suggests, has a long and narrow shape with a tapered tail that you rarely ride on. The nose is wider than the tail though still narrowed down and pointy.

The pintail is much wider in the middle than at the tips, with a longer and narrower aspect than the cruiser.

Both cruisers and pintails are generally topmount – drop-through cruisers exist but in this post I do not consider them as cruisers. This means both pintails and cruisers are quite responsive in turns as you’re riding directly on top of the front truck.

The shorter wheelbase of the cruiser, however, generally makes it more nimble compared to the pintail.

Cruisers usually have a kick tail and sometimes a nose kick. While Pintails have a (long and narrow) tail, they rarely have a true kick (angled upward). The kick also helps to make the cruiser more agile and turny.

Pintails generally have little concave to allow the rider to move their feet freely. Pintails are primarily designed for riding on flats.

In contrast, most cruisers have some sort of concave to help lock in your feet during kick turns, kick flips, or when riding down a hill.

Due to their longer form, pintail decks commonly have more flex, which makes carving and pumping a nice and flowy experience. Cruisers are generally stiffer to facilitate kick tricks and ollying as well as faster riding.

Both pintails and cruisers come in various materials including full maple or bamboo construction. Bamboo cruisers like the Loaded Poke are flexier than average, though generally not as flexy as bamboo pintails (e.g. the Landyacht Chief).

In the next sections, I briefly compare pintail and cruiser for various riding styles.

If your goal is to cruise around the neighborhood, parks, or running trails, either a pintail or a cruiser can be a good choice. A pintail might give you a smoother, more relaxed ride due to the added deck flex which adds energy to your pushes.

A pintail will also generally have a bigger foot platform and wheelbase compared to a shorter cruiser, resulting in more comfort and stability for relaxed cruising while still providing topmount reponsiveness.

If you’re mainly planning on commuting on bike trails and smooth paths, see the above section. On the other hand, if your commute involves crowded and congested areas and/or sidewalk riding, a cruiser will generally be much more nimble and agile than a pintail.

The kicktail of a cruiser will also come in very handy for quick turns and hopping on and off sidewalks. The smaller and lighter deck will also be less bulky and easier to carry around compared to a pintail when walking across traffic and walking into a store or building.

Pintail vs cruiser: carving and pumping

If your longboarding goal is to carve and pump with as little pushing as possible, a pintail can give you a nice fluid feel due to the flexy deck and longer wheelbase, both of which contribute to making pintails good pumpers.

That being said, some cruisers, when fitted with the right trucks, are also great for pumping and carving. The Loaded Omakase with Carver trucks, in spite of its stiffer flex, is a very good example. The Loaded Poke, with its subtle bamboo flex and 20+” wheelbase, is also a great pump and carve board.

Thus, both a pintail and a cruiser can work for pumping. Which you choose depends on additional factors such as size preference and whether you need kicks for turns and hops.

It’s worth mentioning a special type of cruiser, surfskates, which are specifically designed for effective surf-style carving and pumping. You’ll find everything you need more about surfskates here on this website.

Freeride and downhill involve carving, sliding, and switch riding at speed. A pintail is generally not the best option for going fast, due to the flexy deck and the narrowed shape in the back.

Some cruisers can handle speed quite well, such as the much praised Loaded Tesseract. These cruisers generally have a longer wheelbase (around 20″), large wheel flares for running big wheels, concave and contour for foot lock-in, and kicks for control at speed.

Besides cruisers, twintip drop-through decks with large cutout shapes are a very common choice for freeride.

Kick/flip tricks and skatepark/bowl riding are another area in which cruisers rules over pintails. Stiffer rockered decks, tail/nose kicks, and cuddly concaves are essential for these riding styles.

A pintail can be a decent choice for dancing assuming it’s long enough (e.g. this guy). The length and mid width may provide decent room for footwork. The typically flat concave won’t get in the way of foot motion.

A nice flex can also help for carving and pirouetting (albeit not for kick flips). On the other hand, the super narrow tail and the salient rear wheels of a pintail can be an issue for some dancers – though narrower trucks can help solve it.

Cruisers are typically too short for dancing. Hardcore dance aficionados will typically opt for a dedicated dancer longboard instead, such as the legendary Loaded Bhangra.

In conclusion, pintails and cruisers are very different beasts, each with their own charm and drawbacks. While a cruiser will typically have more uses than a pintail, the latter offers a unique relaxed riding feel that is hard to reproduce on other types of longboards.

If you’re still not sure which to choose, take a look at my longboard selection tool, that should give you some ideas to start with: