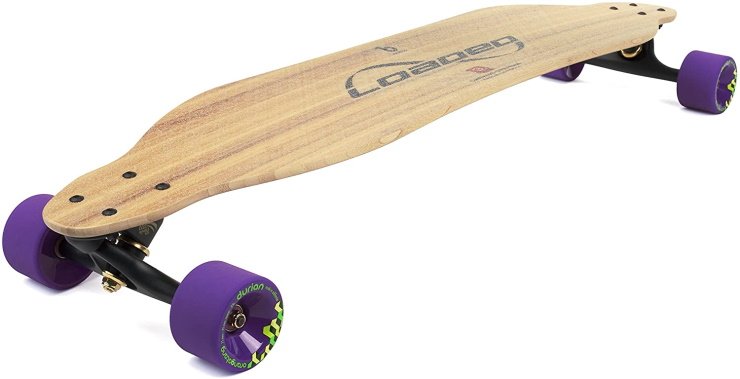 Loaded boards are recognized as being among the most high-end longboards out there. Each Loaded model focuses on specific areas of the riding style spectrum.

The Vanguard is an essential piece of Loaded’s impressive lineup. It’s positioned as a snowboard-style flexy topmount primarily designed for exceptional carving and pumping.

The Vanguard is a full-sized longboard (38″ or 42″) characterized by a lightweight snowboard-like construction, a cambered profile with sidecuts (we’ll see why this matters) and high-energy flex.

Loaded Vanguard owners swear by this board like there’s no other, and it’s quite common for them to ride daily it for 6 to 10 years! While many rave about the carving experience, some also use it for distance commuting, while a few like to freeride on it.

The Vanguard impresses you by its responsiveness the moment you step on it. The flex is so bouncy you feel like you’re on a trampoline – especially the flexier versions. This allows for very deep carves and slashy pumps you don’t typically get on other boards.

Riders generally agree the Vanguard is the ultimate carving board – some refer to it as a “carving system”. The bounce in the deck is extremely energetic yet forgiving. The camber gives you release/pop out of your turns. Many riders who’ve owned many different boards feel the Vanguard is by far the best they’ve ever ridden.

The carving feel you get also depends on the amount of flex you choose – the Vanguard comes in 5 different flex options. Although some riders start with a stiffer option, many end up swapping it for a flexier version as they get hooked on the flexy carving feel.

The deck flex combines with the Paris trucks to offer one of the smoothest and most responsive carving feel. Because of the topmount design, the Vanguard has a tight turning radius. Riders commonly evoke a snowboard-like experience.

The “trampoline” feel of the Vanguard can take a bit of getting used to initially but typically ends up being addictive. Your weight counteracts the flex which locks you in position and results in a special smooth riding feel.

The bouncy flex of the Vanguard results in very deep pumps, not often found on other boards. This makes it a very good board for distance pumping and commuting (LDP) due to its special pumping capabilities.

Riders also love the Vanguard’s light weight, which makes it easy to carry around when cruising or commuting on it.

The Vanguard is commonly used for dancing and freestyle as well – particularly the long version. Due to the flex and carving ability, it very suitable for cross-stepping, ghost riding, and doing some kickflips and light slides, e.g. with Orangatang Stimulus wheels.

The Vanguard, on the other hand, is not the best board for high-speed freeriding and downhill. Most riders agree it has too much flex for speeds over 25 mph, and sliding can feel a bit sketchy due to the camber. The lack of concave also makes it more challenging to keep on the board.

The Loaded Vanguard is a symmetrical topmount shape with a length of either 38″ or 42″ (two sizes) by 8.5″ width, quite narrow compared to most other symmetrical cutouts. The wheelbase of each version is 31.5″ and 35″.

The deck has a hybrid construction with vertically laminated bamboo core and triaxial snowboard-like fiberglass top and bottom. It features beautiful bamboo veneer graphics on the bottom.

The Vanguard has a cambered platform (higher in the center than at the mount points) which combines with the composite material to give the deck that high-energy springy feel it’s known for.

The Vanguard’s shape is tapered at both ends with big wheel cutouts for maximum wheel clearance, allowing for deeper carves and tighter turns – the board’s primary focus.

The Vanguard also features sidecuts (a narrowed “waist”) to reduce torsional stiffness between the feet. This results in better control in tight turns and contributes to that special carving feel.

The deck’s light concave is also designed for an optimal carving and pumping experience, allowing the rider to shift their feet freely for deeper turns.

As mentioned, the snowboard-like bamboo and fiberglass material used to produce the Vanguard results in a relatively lightweight board for it’s (full) size. The deck alone comes in at between 2.7 lb and 3.8 lb depending on the length version and natural variation in the bamboo material.

Like most Loaded longboards, the Vanguard really stands the test of time and can handle a lot of abuse. Riders praise the boards’ exceptional reliability and durability. Many have been riding their Vanguard for 6 years, sometimes even up to 10 years, without any failure, and choose to buy it again once theirs gets too old.

As mentioned the Vanguard comes in two different lengths and 5 different flex ratings, so you may need some help in choosing the right deck for you.

One thing that’s not immediately clear about the Vanguard is that size and flex are tied to each other: Flex1 and Flex2 are associated to the 42″ length (wider stance, bigger riders), while Flex3, 4, and 5 come with the 38″ (average size riders). The longer a deck, the stiffer it needs to be for strength and ground clearance.

Now the choice of size and flex option is typically based on your weight, height/stance, and riding style. As a rule of thumb, heavier riders generally choose stiffer decks, and taller riders go for longer decks.

So if you’re a heavier rider (200+ lbs) for example, you should probably opt for the bigger version with Flex 1 or 2 for a stronger deck.

The above chart, however, is only a general guide, and riders often choose based on their own riding preferences. For example, you may choose a flexier version than the chart suggests for more responsive carving or for more control and tighter turns at low speed.

On the other hand, a stiffer board will be more stable at higher speeds. It will also hold up better for hard freestyle tricks such as shuvits, bonelesses etc.

Riders also tend to prefer the longer and stiffer deck versions of the Vanguard for long sweeping carves down small hills. The 38″ flexier versions, on the other hand, are often preferred for flat terrain and crowded areas such as a college campus as they are more responsive and nimble.

These are some concrete examples from actual Vanguard owners:

If in doubt, Vanguard riders recommend erring on the flexier/smaller side (for an average rider weight) as in many cases, those who start with a stiff deck end up switching to a flexier one after a while.

It’s worth noting, however, that decks will generally do become flexier over time as they break in.

The Vanguard comes in two Loaded recommended setups, “Carving and pumping” and “Monster truck” – though you can alternatively go for a custom config.

The Carving and pumping setup focuses and fluid, fast, and smooth carving with large (75mm) and grippy Orangatang In Heat wheels. You can see the Carving & pumping setup on the Loaded website.

The “Monster truck”, on the other hand, includes the HUGE 85mm Caguamas – also a 80A duro like the In Heats – for really fast and smooth riding.

The fact that you can run 85mm wheels is an indicator of the Vanguard’s amazing clearance and carving-focused design – most “normal” longboards would at least need big risers to run these wheels wheelbite-free.

The Caguama setup includes high-rebound Orangatang Nipple Bushings for uber-responsive carves, and a custom washer configuration to ensure a smooth and durable setup. This “Monster truck” Vanguard setup can easily roll over all kinds of obstacles on the pavement.

The Loaded Vanguard is a very durable, high-flex, uber-responsive longboard built specially for carving and pumping. It’s lightweight, playful, and buttery-smooth, built with the highest quality.

This board is particularly great for hard carving, distance pumping, and even dancing/freestyle. It’s also exceptionally smooth and comfortable for all-around cruising. 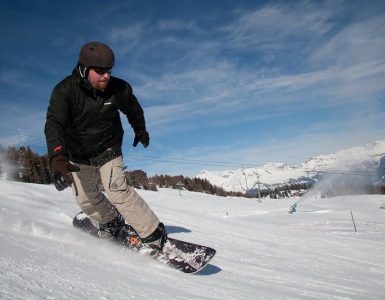 Snowboarding Over 40: Is It For Everyone?

Snowboarding has a reputation for being a youth sport because of its association with the skate / surf culture. While it is true that most riders are under 30, there are many capable over 40 year olds who shred just as... 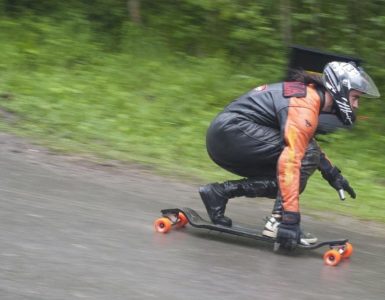 How Fast Can You Go on a Longboard ?

Longboarding is an awesome way to move around, much faster than walking.  Longboards are typically faster than skateboards due to their larger wheelbase (distance between trucks) and bigger wheels. Just how... 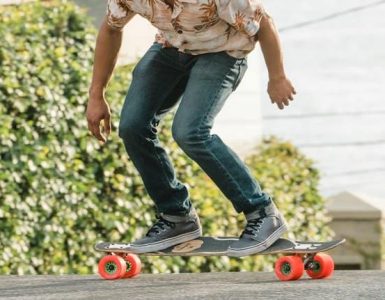 Many people are attracted to longboarding because it feels so great being able to surf on land, be it for commuting or for more intense activities like carving or speed riding downhill. A question that comes up very... 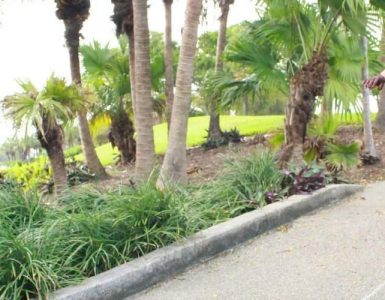 What is Carving on a Longboard? A Closer Look at Street Surfing

You may have stopped in the street to watch these guys or gals moving on their longboards in a fluid and flowy ride, maintaining rhythm and speed without their foot even touching the ground for pushing, looking like...