Is Surfing Harder Than Skateboarding? Yes It Is, Here’s Why 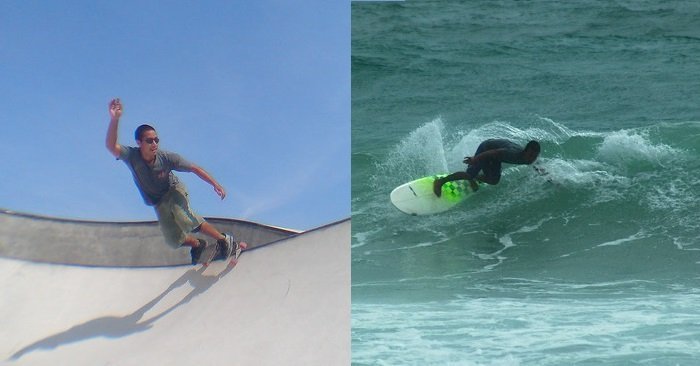 There have always been ongoing debates in the board sports community about which of surfing and skateboarding is more challenging.

Skateboarding was created initially as a means to cross train for surfing when the waves weren’t there, but it has since grown into its own complete discipline.

So is surfing harder than skateboarding? Riders generally think so, namely because of the hard-to-read and potentially hostile ocean environment, the ever-changing liquid riding surface, the significant upper body strength requirement, and the steep learning curve.

Some riders, however, will argue that skateboarding is harder because it involves more frequent serious injuries, requires very sharp balancing and agility skills for advanced tricks, as well as strong mental skills for speed.

By the way, can you wear sunglasses for surfing? See here

The ocean environment is one of the factors that can make surfing more challenging than skateboarding. As a surfer, you need to not only be a strong swimmer but also to understand the ocean, rips, tides, and weather. You must also know how to pick the right wave and how to stay away from big sets and rough impact zones. You also need to learn to avoid getting hit by or losing your board when a wave crashes.

Skateboarding is typically done in a less challenging environment, unless you’re riding a big vert at the skatepark, commuting distance in heavy car traffic, or bombing a big hill at very high speed.

Surfing involves riding on a liquid surface, which is harder than riding on smooth concrete as is the case on a skateboard. Also, when skateboarding your riding surface is still and predictable, while when surfing you have no stable point to push against as everything under you is fluid and shifty – speed is the only thing that keeps you and your surfboard afloat.

The wave you surf may also crash or close at any moment, and is very dynamic in nature. For most people, this is more challenging than riding on firm ground.

Is surfing harder than skateboarding in terms of physical abilities? Many riders think so. Granted, surfers and skaters need similar balancing skills for riding their board, although there are subtle but real differences between the two in terms of stance and front vs back foot pressure.

However, keep in mind that surfing is at least 90% paddling! The hardest part of surfing is NOT standing on your board, but rather catching a wave. This involves upper body strength for strong paddling out across incoming waves and currents, duck diving under these waves, and forcefully paddling into a forming wave for takeoff. That’s the biggest challenge of surfing, that unique conditioning you need to acquire to get into waves.

Skateboarding, in contrast, is mostly about leg strength for kick pushing, and skillful body shifting and hip rotation for carving and sliding.

That being said, longboard skateboarders who are into dancing and freestyle need sharper than average balancing skills for performing the extreme kick / flip tricks their styles involve, on decks much smaller than a surfboard. Likewise, surfskating can be an intense full body workout when practicing surf maneuvers or carving hard in skateparks. So these specific styles definitely tip the difficulty scale a bit more toward skateboarding.

Which of surfing or skateboarding is harder to learn? Here again, riders generally feel surfing is harder. It’s no secret that surfing takes months of sustained efforts to begin to master – it’s often viewed as the hardest board sport to learn.

The main reason surfing is so hard is that no two waves are the same, so you don’t have the benefit of repetition. When learning to skateboard, you can practice a move or trick over and over in the exact same conditions, whereas in surfing, you typically have to wait to get the right wave again for trying that move.

In the meantime, you have to fight against incoming waves to get back up to the peak, and then compete against other surfers to be able to catch that right wave.

Another thing is, if you take a break from surfing for even a few weeks, you lose some of the unique conditioning required to catch waves. Getting back on a skateboard after a break, on the other hand, typically only requires a few moments before you pick up where you left off.

Surfing vs skateboarding: risk of injuries

One aspect that tips the scale in favor of surfing (making skateboarding harder) is the consequences of falling, which are much more serious on a skateboard. Skateboarding will cause consistent small injuries – bruising, shinners, roadrash, chin cuts, strains etc – but also potentially nasty ones – broken ankle or wrists, and even brain trauma!

Falling off your surfboard is generally risk-free, though there are other hazards such as getting caught inside in a big wave set, getting sucked out to sea by strong rips, getting thrown onto rocks, getting hit hard by a surfboard etc. However, these are much less common and frequent, and can easily be avoided with the right knowledge – whereas skateboarders will fall no matter what!

Dropping into a very big or powerful wave means overcoming the fear of wiping out, being crushed by the wave, getting hit by your board, and being held underwater for long seconds while the next wave is coming in soon after!

Which is harder? you tell me…

One more aspect to mention when comparing the difficulty of surfing vs skateboarding, is the efforts required to be part of the community. Sure, anybody can pick up a skateboard or a surfboard and go ride on the sidewalk or at the local beach. But eventually, becoming a skater or a surfer often involves become part of a big family or tribe with its own rules and etiquette.

Younger street skateboarders and shortboard surfers are probably the hardest tribes to break into, they are exclusive and you have to prove your skills to be accepted. Longboarders, on the other hand, both longboard skaters and longboard surfers, tend to be more relaxed and open-minded and are more welcoming of diverse age groups and skill levels.

When assessing which of surfing or skateboarding is harder, you need to consider factors like riding surface (concrete vs water), riding environment (street traffic vs currents and hostile locals), risk of injury (traumatic concussions vs drowning), learning curve, and more. Most riders agree that surfing is harder, though certain skateboarding styles are just as challenging, if not more, than surfing.