Can You Use A Surfboard As A Paddleboard? 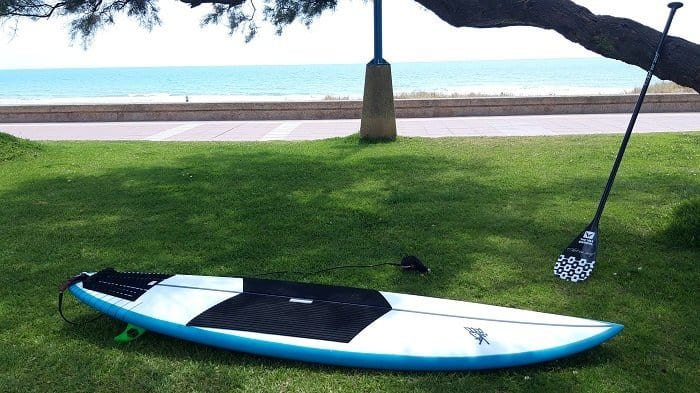 If you’re looking to get started with stand up paddling (SUP), you may be wondering if you can use a surfboard as a paddleboard. Perhaps you have an old surfboard lying around, of because you’re already a surfer and would like to give SUP a try before biting the bullet and buying an expensive paddleboard. After all, paddleboards are nothing more than oversized surfboards, right?

Well, yes and no. Although paddleboards are similar in shape to surfboards, their dimensions and proportions are generally quite different. The goal when riding a paddleboard is to stand continuously on the board and use a paddle for moving. Meanwhile, on a surfboard, you spend most of your time lying down prone on the board and paddling with your hands in the water.

for this reason, a paddleboard normally has a lot more volume than a surfboard and is generally longer, wider, and thicker. The added volume, width, and thickness give the paddleboard the stability needed to stand on it even at low speed. Therefore, using a surfboard as a paddleboard is a challenging endeavor since most surfboards have low volume as they’re not designed with stand up paddling but prone hand paddling in mind.

Let’s dig a bit deeper and look at the specific differences between a SUP and a surfboard, and if and when using a surfboard as a paddleboard can be a feasible option.

Note: in this post, I will only be referring to paddleboards designed for surfing (surf SUPs) as opposed to larger recreational, touring, yoga, racing, or fishing paddleboards which are generally much larger than even a large surfboard.

By the way, can you wear sunglasses for surfing? See here

Paddleboard vs surfboard: volume and size

A regular shortboard surfboard will typically not have enough volume to keep the rider afloat other than when riding a wave. In between waves, the board’s volume is just too low to stand on it – unless it’s an unusually wide board or the rider is very small or exceptionally skilled.

Paddleboards are built for stability and floatability when paddling at low speed from a stationary situation in-between waves, so they’re generally thicker, wider, and most often longer than a normal surfboard. The volume is required to float the weight of the rider without submerging the board. Most surfboards will not be buoyant enough for standing except with strong momentum in waves.

As an example, paddleboards used for waves by average riders tend to have a foam volume of at least 100L (liters) – typically below 200L. In contrast, normal shortboards usually have a volume between 24 and 32 liters.

If you try using a regular surfboard for paddleboarding, chances are you’ll find yourself sinking straight into the water when trying to stand up on it. That being said, some 9-10 foot surfing longboards with 23.5″ width and 3.5″ thickness have a volume around 85L, which is similar to a smaller paddleboard.

Paddleboarding on a surfboard: rider level and size

Whether you can use a surfboard for paddleboarding also depends on your body weight and skill level. The smaller the rider, the less volume is required for floating – you may see small kids standing on a normal size surfboard and having a blast with a paddle without any effort.

The other key factor is your SUP level. Like surfboards, paddleboards get more buoyancy as they go faster. Skilled riders are able to ride very small SUP boards once they get into the waves. In between waves, these experienced riders are also able to generate enough momentum and speed through their efficient paddling to stand on their 6-foot something, 55 L SUP.

As they paddle, their board is typically submerged with water up to their knees. Their skills allow them is to stand and balance quickly and start paddling hard enough to generate speed before the board tilts and throws them off.

Having a shorter and narrower board gives these riders surfboard-like maneuverability for performing radical turns, as opposed to “normal” SUPs which tend to be much larger and less responsive than surfboards. For these reasons, advanced SUPers are also capable of paddleboarding on a surfboard with decent volume – though they generally prefer small SUPs.

Pro riders can ride SUPs with as little as 55L. The rule of thumb is, for a beginner to intermediate level paddleboarder, choose a volume of about your weight in kg + 40 (so if your 75kg, ride a 115L board). More advanced riders can pick a volume of (weight + 10) e.g. 85L in our example. Pro riders typically go for a number lower than their weight (e.g 65-70 L).

Besides volume and floatability, another aspect that typically gets in the way of using a surfboard or longboard for paddleboarding is construction. A SUP board is generally much stronger than a regular surfboard or longboard because the top deck is reinforced at the spots in the area where the rider stands. Without reinforcement, the top deck would quickly collapse under the feet due to rider weight – even with reinforcement, many lightweight custom SUPs will initially cave in a little before stabilizing.

There’s a tradeoff between weight and strength since more resistance (including for beginners who tend to kneel on the board) requires extra layers of material, leading to a heavier board. Surfboards are generally designed to be as lightweight as possible to facilitate fast turns in the wave, therefore they are typically much more vulnerable to foot or knee pressure.

Rocker is another major difference between paddleboards and surfboards, and also contributes to making using a surfboard for paddleboarding more challenging. Regular surfboards typically have more rocker to create drive on the wave. Paddleboards, on the other hand, tend to have a long flat rocker for gliding and tracking.

Performance wave SUPs, though, have more rocker than regular SUPs, closer to a surfboard. As a result, these SUPs don’t track very straight when paddling on flat water, with extra skills required from the rider for paddling straight. Stand up paddling on a surfboard on flat (between waves) will be even harder due to the extra rocker.

Can you SUP on a longboard?

I’ve discussed using a regular surfboard for paddleboarding, but what about using a longboard specifically? Is it easier to SUP on than a regular shortboard?

Longboards are the type of surfboards which are the closest to SUP boards. As mentioned, it’s common to have an 85L volume on a 9 or 10′ longboard, closer to the volume of a small, performance paddleboard. However, a longboard will typically have a max width of about 23.5″, while 24″ is about as small as a SUP gets – and only a pro-level or very small rider will be capable of standing and paddling on one of those.

Besides extra width, even a smaller wave paddleboard will generally be thicker (up to 4″ thick) compared to a regular longboard, providing the flotation required to stand without the momentum from a wave.

So can you SUP on a longboard? If you have the skills and lightweight you can probably stand up and paddle on a 9-10′ longboard and get into waves on it. However, be aware it won’t be as comfortable, stable, and efficient for paddling as a true SUP. Also, the longer width may make it harder to perform fast surf turns in the wave compared to a short but wider/thicker SUP board.

Conversely, can you surf on a SUP board?

Surfing on a SUP board is certainly easier than SUPing on a surfboard. Since a SUP is generally more floatable than a regular surfboard or longboard, hand paddling (lying prone) and getting into a wave on a SUP is generally easy. The only caveat is if the SUP is very wide, e.g. over 30″, riders with small arms may have a harder time hand paddling when lying down on the board.

As an example, people with disabilities or injuries, as well as young or older people, can benefit from the extra buoyancy and volume of a SUP board to learn to catch and surf smaller waves.

In stronger surf, however, using a SUP as a surfboard can present hazards as the board will be harder to control and paddle back out on. Duck diving is generally impossible on a SUP.

So can you paddleboard on a surfboard? You can if you have a bigger longboard and if you have decent SUP skills. However, paddleboards generally have more volume, and a shape designed for standing up and paddling on flat while staying maneuverable for quick turns in waves.

SUP boards will generally be thicker and wider than even a larger surfboard, although wave SUPs can be shorter than a longboard. They also have a different rocker profile, better suited for paddling in and between waves. In short, if you want to start SUP surfing, your best bet is to get yourself a SUP!