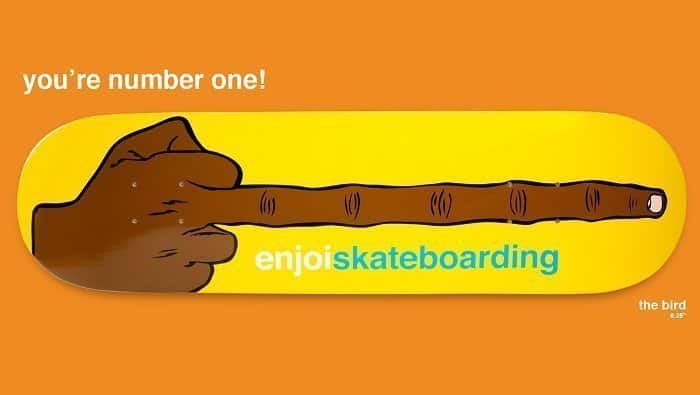 Enjoi Skateboards is one of the newer core skate brands co-created by Rodney Mullen and distributed by the Dwindle Distribution, a world-leading board sports distribution company now part of the Globe group.

Much younger than sister skate brands like Element or Blind, Enjoi was founded in 2000 by pro skater Marc Johnson with the support of Rodney Mullen – one of Dwindle co-founders. Mullen soon left Enjoi to co-found Almost Skateboards, another leading brand in the skateboarding world. Johnson later left the company as well to create Chocolate Skateboards – also a core skate brand – and was replaced by Matt Eversole as head of the company.

Enjoi, Almost, and other famous brands such as Cliché, Blind, Superior, Darkstar (and more) are all under the Dwindle umbrella – and hence the Globe group.

Enjoi has released many successful skate videos since its creation, which, along with the star pro riders who represent the brand, have greatly contributed to the brand’s success. Their first video, “Bag of Suck”, released in 2007, won the prestigious Transworld Skate Video of the Year award.

Besides professionally endorsed decks, Enjoi also markets wheels, bearings, and streetwear. Enjoi’s logo is a black and white cartoon panda which is often featured on the brand’s decks and clothes graphics – although cats have a strong presence as well. The panda is often depicted in funny situations along with light-hearted humorous phrases. This is in contrast to the serious or dark themes found on other core skate brands.

Besides having been founded by two skateboarding legends, Enjoi Skateboards have supported many of the best riders out there including famous names such as Jerry Hsu, Chris Cole, and Louie Barletta.

Are Enjoi Skateboards any good?

Generally speaking, skateboarders trust products from the Dwindle brands, and Enjoi is no exception. Most skaters will buy an Enjoi, Blind, Almost or Cliché deck or even complete without a second thought.

Many skaters are happy with the quality and durability of their Enjoi skateboard. The Adams Resin 7, for example, is considered a very lightweight board that can take a lot of abuse. It’s often reported to maintain its pop even after weeks on intensive skating. The White Panda Infest or the Louie Barletta Plaid Panda, for example, are known to keep their shape and pop for longer than 2 years.

Obviously, most quality skateboard decks will eventually show signs of wear when continuously performing hardcore street tricks. Some hardcore skaters note the Enjoi decks tend to get pressure cracks quite easily. Some feel these decks are not as tough as other brands. For the average skater, however, they hold up quite well and can easily last 4-8 months – which is pretty good by a street skater’s standards.

What skaters like most about Enjoi decks is the amazing pop, the durability (as discussed), and the mild concave. Many recommend Enjoi decks for being very versatile as their concave makes for comfortable riding and good flips for all types of street skating. The Resin 7 construction makes the boards feel really solid.

The Whitey comes in different setups including this Amazon config with Core trucks, which are decent quality entry-level trucks, 52mm TGM wheels with 99A durometer (again, decent wheels for average skating), and good quality Amphetamine Abec-5 bearings. This other setup has Tensor trucks instead of the Core.

The Enjoi Repeater is a larger deck with a full concave and steep kicks. It features a cool panda pattern theme on the bottom (hence the name Repeater). The Enjoi Repeater deck comes in several versions each with a distinct color theme and deck size:

Like for the Whitey, you can find affordable complete setups on Amazon for all three versions fitted with Core trucks, 52mm (99A hard) TGM wheels, and Amphetamine bearings.

The Enjoi Kiss Metallic Raemers is a 8.25″ deck featuring Enjoi’s panda with his face painted in the style of the KISS metal rock band, on a purple background. This pro is model named after iconic pro skater Ben Raemers who sadly passed away a few days prior to the date of this writing.

The Enjoi Kiss offers a medium concave and solid Resin 7 construction. This is a must-have board for skaters who are KISS fans.

Check out this complete setup with Core trucks and TGM 51mm wheels on Amazon.

The Enjoi Logo Crap is a 7.75″ x 31.2″ deck with a 13.88″ wheelbase. It also boasts a Resin7 construction with 7 plies of Hardrock maple single pressed with strong resin glue. This makes the Logo Crap light and durable and gives it a good and longer-lasting pop (as many Enjoi skaters confirm). The Logo Crap also features Enjoi’s black and white panda mascot on a pleasing brown background with nature-like motifs.

This complete setup includes Tensor trucks, 51mm 92A (softer) Enjoi wheels, and shielded bearings – a great setup for riders that are starting out and seeking to build up their skateboarding skills.

The Enjoi Brevard La Loteria is 8.0″ x 31.6″ with a 14″ wheelbase. It has a mellow concave and a steep kick. This is the pro model for Samarria Bevard, one of Enjoi’s famous female riders. The deck features awesome artwork with 5 colorful, numbered playing cards – hence the name “La Loteria – the gamble”. The cards depict wacky and seemingly unrelated things – a microphone, a cannabis leaf, a figure skating couple, a clenched fist revolution gesture, and a panda hanging off the rear truck!