Wakesurfing vs Surfing: How Do These Awesome Sports Compare? 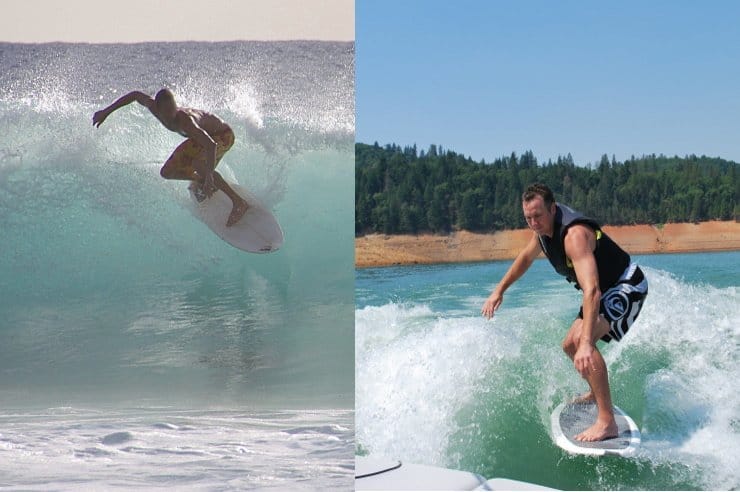 Wondering how ocean surfing and wakesurfing behind a boat compare, and if the skills from one translate to the other? If so, you’ve come to the right place.

In case you’re new, wakesurfing involves riding a wave behind a boat that produces it. Unlike in wakeboarding, wakesurfers are NOT towed by a rope after getting into the boat wave.

So wakesurfing and surfing undoubtedly share a lot (hence the names) as they both involve riding a board on a wave solely by leveraging the wave’s energy.

The biggest differences between surfing and wakesurfing stem from the environment these two sports are practiced in – the ocean vs flat water behind a boat, and the nature of the wave – natural waves vs a boat-made standing wave. More on that.

Wakesurfing vs surfing: board & gear

I’ll start with the board. Wakesurf boards and ocean surfboards are quite different – though a seasoned rider can certainly ride a boat wake and have fun on a regular ocean shortboard, say in the 5’10 – 6’2′ range.

Ocean surfboards, nevertheless, are designed for larger waves than boat waves and are also built for efficient paddling, with generally more volume compared to a dedicated wakesurf board.

As a result, ocean surfboards are harder to stay on a boat wave with. A custom wake surfboard (typically in the 4’7 – 5’4 range) can make a big difference, including for seasoned ocean surfers, offering a lot more velocity and responsiveness.

Another reason a regular surfboard is not as efficient for wakesurfing is the “standing” nature of the wakesurf wave (see this section).

Conversely, wakesurfers who take up surfing often find themselves switching from a 4’+ board to a 8 to 10′ log more adequate for small ocean waves – a significant shift.

There are actually two different styles of wakesurf, so-called surf-style boards and skim-style boards. As the name implies, surf-style wakesurf boards are closer to ocean surfboards and allow for more ocean-like maneuvers.

Besides board differences, wakesurfing also requires more gear than ocean surfing including the boat and a 10-20 feet feet rope – which allows you to stay close enough to the boat to get into the wake.

One big advantage of wakesurfing over ocean surfing is the availability of rideable waves. Assuming you have access to a wakesurf boat (see this post), you can go riding any time you wish without depending on swell, wind, or tide.

Riding conditions behind a boat are always consistent and optimal, whereas in the ocean, the waves vary hugely in terms of size, power, and quality.

Another thing in favor of wakesurfing is that it can be practiced on any body of water, even away from the ocean. On the other hand, not everyone has access to a boat – purchase, maintenance, storage, and fuel can add up. In contrast, surfing is basically free if you live near the ocean.

Getting into a boat wave vs an ocean wave

Now let’s look at takeoff technique. One of the biggest differences between surfing and wakesurfing is that, while the surfer paddles into the ocean wave using his/her arms, the wakesurfer intially hangs on to the tow rope and gets pulled into the wake by the boat.

The tow rope pulled by the boat helps you get up on your board above the water and slide into the wave with some initial speed. You then let go of the rope and leverage the wave’s energy.

When surfing, your arms need to generate the power and speed to propel yourself into the breaking wave. You must then pop up on your surfboard as it starts dropping into the wave without the help of a tow rope.

Probably the biggest difference between wakesurfing and ocean surfing is the nature of the wave. The boat-made wave feels a lot like a standing wave, even though you’re actually moving across the water behind the boat.

The wave never actually breaks and the water keeps moving at a really fast pace due to boat speed. Surfers often compare a wakesurf wave to a standing river wave as the water flow tends to suck you up (and over) the face of the wave.

The boat wave is not only faster but also much shallower than an ocean wave, which is what makes wakesurfing feel closer to riding a standing wave than a real ocean wave.

While you can ride vertically up and down as much and as fast as you like, your horizontal motion is limited. You can’t really ride down the line as you have a short wave face to ride on.

Thus, while surfing a boat wave and surfing an ocean wave both offer an amazing feeling, they are very different due to the way the wave forms.

Another important difference is that in wakesurfing, you can ride for as long as the boat runs or until you get tired – so potentially for hours. In the ocean, a wave ride typically lasts a few seconds to a couple of minutes before you paddle back out to the lineup.

How does wakesurfing compare to surfing for learning? Everyone agrees surfing is a lot more challenging to learn. Wakesurfing does not require some of the hardest skills of surfing, such as paddling, popping up in the wave, fighting current, and duck diving under waves.

As a learner, being towed into the boat wave vs paddling in also gives you the opportunity to ride the wave much sooner than on ocean waves. You also get to stay on the wave much longer, which helps you build skills faster.

Wakesurfing also eliminates the challenge of reading the wave, positioning yourself right, turning around when the wave arrives, and popping up the surfboard while it’s dropping. Since the boat wave is much smaller, you also don’t have to deal with big sets and wipeouts.

Ocean surfing requires building shoulder, back, and arm strength for weeks – until you do, chances are you won’t be able to ride a real wave. In surfing, at least 90% of your time is spent paddling. In contrast, reasonably fit people are often able to wakesurf behind a boat after a few days.

We’ve seen how wakesurfing and surfing differ in terms of getting up and into the wave. Once a wakesurfer lets go of the rope and starts riding, however, the riding experience gets much closer to ocean surfing.

Both surfing and wakesurfing involve the core skill of pumping the board – gaining and maintaining speed on the wave through shoulder-hip-toe body motion for weighting-unweighting the board (see this post for more about pumping on a longboard).

Pumping also goes hand in hand with “carving”, connecting quick turns to generate speed through rail-to-rail transition – shifting your body weight from one edge to the other with the right timing.

Other fundamental maneuvers wakesurfing and surfing have in common include bottom and top turns (going up and down the wave face), 360s, and off-the-lips.

Skim-style wakesurfing also involves air tricks such as jumps and full-rotation spins, also found in ocean surfing (aerials) through not as common outside of pro surfers.

Ocean surfing, on the other hand, commonly involves cutbacks and snapbacks, not so frequent in wakesurfing due to the non-breaking wave, the higher flow speed, and the much shorter face.

For seasoned ocean surfers, riding waves is mainly about dropping into powerful waves and making wide powerful turns or getting barreled. In contrast, wakesurfing is more about getting air and pulling 360s while switching from one side of the boat wave to the other.

The last aspect I’ll touch on is safety. Both wakesurfing and ocean surfing come with their own hazards – after all, they are water-based action board sports.

Surfing hazards are mostly related to the ocean – rips, rocks, big wipeouts, getting dragged under. Other surfers can also be a source of risk – e.g. getting hit by someone’s surfboard at a crowded spot.

In wakesurfing, the main hazards are related to riding behind a boat with an exposed propeller – you should surf behind an inboard or V-drive (see this post), or going too fast – the boat should stay within a 10-15 mph speed range.

While wakesurfing may feel safer than ocean surfing, as wakesurfers become more comfortable just carving behind the boat, they start to try more extreme jumps which carry a higher risk of injury (similar to kitesurfers).

“Normal” ocean surfing with its mellow vibe definitely gets the safety point here.