Wakeboarding vs Water Skiing: How Are They Different? 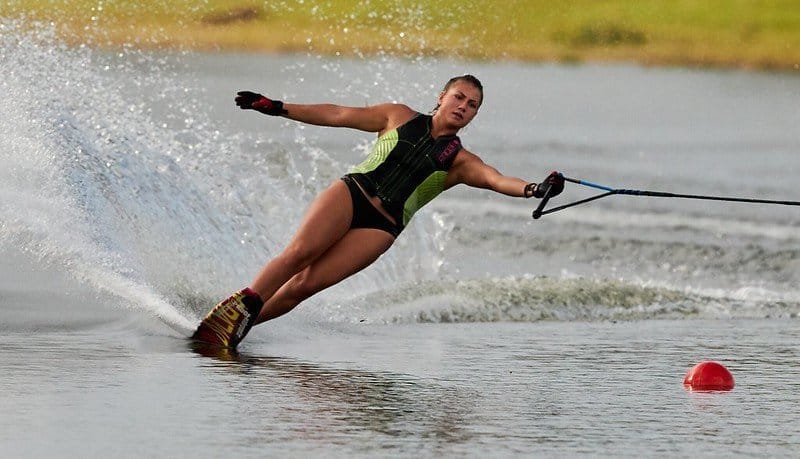 If you’re a water skier considering getting into wakeboarding or a wakeboarder pondering whether to start water skiing, you may be wondering about the difference between the two sports.

These are some of the key differences between wakeboarding and water skiing:

Wakeboarding and water skiing have a lot in common since both involve getting towed by a boat and cutting side to side across the boat wake. However, the skills and learning curves required, the type of workout they offer, and the equipment, are very different for the two.

Wakeboarding vs water skiing: what sets them apart?

Both wakeboarding and water skiing involve hydroplaning behind a board towed by a rope you hold in your hands.

Wakeboarding involves a large snowboard-style board you strap to your feet using fixed bindings. Typically, your feet will remain strapped to the wakeboard even when you fall.

Waterskiing, on the other hand, involves a pair of skis – or a single ski in the case slalom water skiing. For twin skis, you attach each of your feet to one ski. On a slalom ski, your front foot is attached, and you tuck your back foot into a strap behind the front.

On a wakeboard, you ride with your feet perpendicular to the board, like on a skateboard or snowboard. In water ski (twin skis), your feet are facing forward, parallel to each other like in snow skiing.

So the difference between wakeboarding and (twin) water skiing is very similar to that between snowboarding and skiing.

When skiing on a single ski (slaloming), in contrast, you ride with one foot behind the other. However, unlike wakeboarding, the slalom ski is much narrower than a wakeboard, and both your feet are facing forward.

Water skiers try to put as much tension on the rope as they can in turns in order to put up a wall of water. Wakeboarders, in contrast, cruise at lower speeds and don’t pull as hard against the board, focusing on jumps and tricks.

Pull speed and boat driver experience significantly impact how easy or difficult your wakeboarding or waterskiing session will be.

While smooth, glassy water is better for both wakeboarding and water skiing, it’s even more important for water skiing, particularly slaloming (single ski). It’s typically easier to wakeboard on somewhat rough water (albeit not as pleasant) than to ski.

Getting up on a wakeboard vs on water ski

When comparing the ease of learning wakeboarding vs water skiing, opinions diverge, based on rider boardsports experience and water ski type.

For most people, getting up on a wakeboard is easier to learn than on a slalom ski, due to the wakeboard’s larger contact area with the surface of the water.

Also, a deep water start on a wakeboard gives the rider more time to pop out of the water than on a slalom ski (faster start).

If comparing wakeboard and twin water ski, however, the jury is still out on which one is easier. Some find skiing is easier to get up than wakeboarding because you don’t have to go sideways after getting on top of the water.

On a wakeboard, after getting up, you have to rotate your hips into sideways position. For some people, angling your body while the boat starts pulling you in order to get sideways (skateboard style) does not feel natural.

On the other hand, when getting up on two skis, you need to deal with the skis wobbling and moving away from each other. Kids tend to have an easier time getting up on a wakeboard vs on twin skis.

Generally speaking, riders who are experienced in boardsports such as skateboard, snowboarding, and surfing, tend to pick up wakeboarding much easier.

Using freeride skis can make getting up and tracking easier, track though turning with them is not as straightforward.

Is it easier to wakeboard or water ski behind a boat?

For “regular” riding back and forth behind the boat, wakeboarding tends to be easier on the body than slalom skiing. Even doing wake jumps on a wakeboard requires less effort than pulling a slalom from side to side.

The comparison also depends on the level of skiing. Running open water at nearly 35 mph and at 15′ off (i.e. using a rope is 15 foot shorter than a full-length, 75-foot rope) gives you a strong workout with next-day soreness due to the significant pull in turns.

Carving perfect turns on a slalom and boosting across the wake at high speed is a great feeling, but it requires strong skills and is usually harder to learn than normal wakeboarding (without advanced tricks).

Wakeboarding also has its own challenges, however. One of them is the harshness of a faceplant when catching an edge on a wakeboard during a turn, compared to side falling on a slalom or a wedgie on twin skis .

Even though you typically ride slower on a wakeboard, when catching an edge you trip forward and slap the water so hard you’re likely to get a good headache. Wakeboarding falls hurt way more compared to water skiing, so you should always try to keep your edge up!

Which of wakeboarding or waterskiing is harder on the body?

As mentioned, wakeboarding puts much less stress on the body due to the lower speed and greater contact surface which result in a more gentle pull on the arms and shoulders. For many people, the wakeboard stance is also more natural than the slalom position, also reducing stress.

However, wakeboarding makes your body work in an asymmetrical way with the same rotation in your hips and back, since you ride in your natural stance (either front foot forward or left foot forward) most of the time.

Learning to ride switch, i.e. occasionally flipping your board 180º and swapping your front and rear foot, can help reduce the continuous strain on one side of your body, and better distribute the effort over both sides.

The risk of severe injuries related to wakeboarding, however, is estimated to be half of that of water-skiing related injuries.

Slalom water skiers commonly fall on their rib cage with their arm extended during a turn, resulting in bruised or dislocated rib cartilages.

On the other hand, an average wakeboarder may ride all day long doing wake-to-wake jumps, grabs, slides, 180º etc with little risk of falling. Wakeboarders doing more advanced big spins and inverts, however, are often more exposed to the risk of injuries.

Wakeboarding is all about jumping the wake and doing tricks, while “standard” water skiing is about cutting across as hard as you can at 33 mph, spraying as much water as possible.

Slalom water ski racing, which involves getting through a race slalom course the fastest, is also becoming increasingly popular. Other water skiers are into acrobatics-style performance on skis.

Wakeboarding involves dozens of tricks such as jumps, front and back rolls, tantrums, wake to wake grabs, front and backside 360ºs, tricks with one or both hands on the bar, etc.

Comparing wakeboarding and water skiing is an easy feat because, even though both sports involve riding and sliding behind a motorboat, they are very different disciplines.

Wakeboarding is performed at faster speeds on a wide board with a sideway, surf-style stance. It primarily involves jumps and tricks comparable to freestyle snowboarding or skateboarding.

Water skiing involves cutting fast turns from side to side across the water. While acrobatics exist in water skiing, slalom skiing is about speed, fast turns, and optionally slalom racing.

The high speed and extreme turns in water skiing, and the radical jumps and flips in wakeboarding, can result in mild or more serious injuries.