Top Mount vs Drop Through Longboard Trucks: Which Is Better? 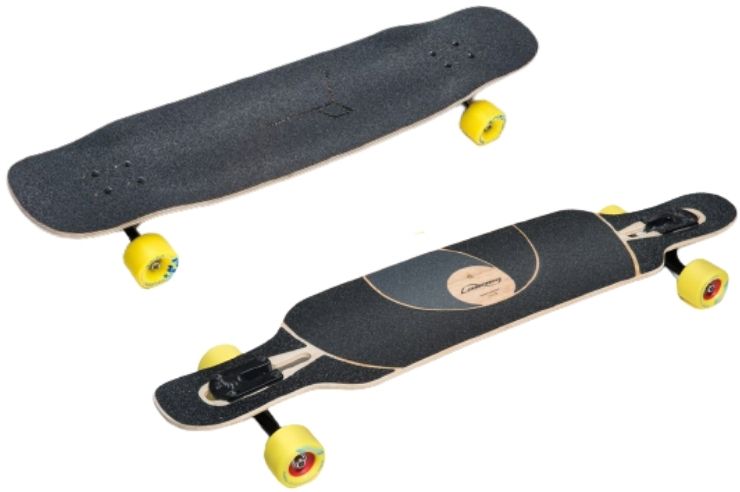 If you’re new to longboarding or getting deeper into the discipline, you’re bound to face the top mount vs drop-through truck style dilemna.

Top mount boards have the trucks bolted underneath the longboard deck, whereas drop-through means the trucks are mounted through the deck – which has cutout holes in it to accommodate the trucks.

To the novice, this may seem like a mundane detail that only impacts aesthetics. In reality though, the choice of truck mount can make a big difference in the way a longboard rides and the type of riding (and rider) it works best for.

Here are in a nutshell the key points that make longboarders endlessly debate about which is the best mount style:

So the main tradeoff between top mount and drop-through is responsiveness vs stability.

That said, the truck mount style of a longboard also affects its shape and features. Let’s look at the pros and cons of each.

Now that we’ve seen the main pros and cons of both mount styles, let’s look at which one wins for different riding styles.

Top mount vs drop-through for cruising

Many riders love slow cruising on a drop-through because of the comfortable ride and easy pushing that results from the deck sitting closer to the ground, adding stability.

On the other hand, some riders prefer the greater responsiveness and faster turning of a top mount for cruising, particularly in tighter spaces or on crowded sidewalks where the ability to make tight turns is helpful.

On the one hand, as mentioned, a drop-through is much easier to push due to the low ride, especially for LDP (long distance pushing). You can really feel the difference with a top mount when you push across town (or between towns) over say 10 to 20 miles.

Pushing for hours on a top mount may get you tired a lot faster as your foot has to reach lower to reach the ground.

Also, the added stability you get on a drop-through allows you to run software bushings, which can make your distance ride more comfortable.

On the other hand, drop-throughs are generally bulkier than top mounts, making them more cumbersome to carry on a bus or train when commuting on a daily basis.

Stashing a drop-through under a desk or in a locker is also harder than a cruiser.

Top mount vs drop-through for freeride

Both top mount and drop-through longboards can work great for freeride. Which you choose depends on your style and preferences.

Some freeriders find top mounts more satisfying because of their high responsiveness and how they lean and turn. They also find sliding on a top mount is smoother due to a better ability to place their weight directly over the trucks.

Others prefer drop-throughs for freeride because of stability at speed. A drop-through freeride longboard will generally have a longer wheelbase than a top mount, making it less prone to speed wobbles.

As mentioned, drop-throughs are lower riding, which also adds to the stability. The large wheel cutouts most drop-throughs have also gives them good clearance for tight carves to control descent, and for tricks such as switch riding.

Drop-throughs make it easier to initiate slides thanks to lower center of gravity. On the other hand, many riders agree a top mount will give you better control throughout the slide due to better leverage over the trucks.

Drop-through, though, are generally considered great for big stand-up and rotation slides.

Top mount vs drop-through for downhill

Downhill longboarders generally choose top mount boards because they turn better. Again, on most top mounts, you stand directly on top of the trucks so these are directly impacted by your movements, making for a very responsive feel at high speed.

Top mount speed boards generally have wheel well flares for wheel clearance as opposed to wheel cutouts like drop-throughs. This lets you stand over the front truck and makes the board very reactive for downhill.

On the downside, the top mount design makes these boards quite unstable at downhill speed – which is why downhillers use low angle trucks to make up for it.

Most downhill longboarders will agree drop-through boards are just not nimble enough for downhill and high speed carving.

This one is a no-brainer: street skaters switching to longboarding will generally choose a top mount board with a tight wheelbase for urban riding and street slashing.

A drop-through will generally have a significantly bigger wheelbase which will make doing ollies, 360s, kick and flip tricks etc a lot more cumbersome. Drop-throughs are not as nimble and versatile for street-inspired riding.

Top mount vs drop-through for pumping

Top mounts tend to work great for pumping because of the higher leverage on the front truck – many of the best pumping boards are top mounts.

That said, certain drop-through longboards like the Loaded Icarus are specially designed for pumping, combining drop-through trucks with special flex construction and springy cambered profile that makes for high energy return in carves.

Top mount vs drop-through for surfskate

Surfskates seek to maximize front truck leverage and turn, so a top mount design is a compelling choice. All the surfskates I know of on the market are top mount.

While some curious riders have attempted mounting surf trucks as drop-through, this generally has resulted in lower turn and pumping ability, somewhat losing the benefit of the surf truck’s special geometry.

If you happen to know of a drop-through surfskate, please share in the comments below this post!