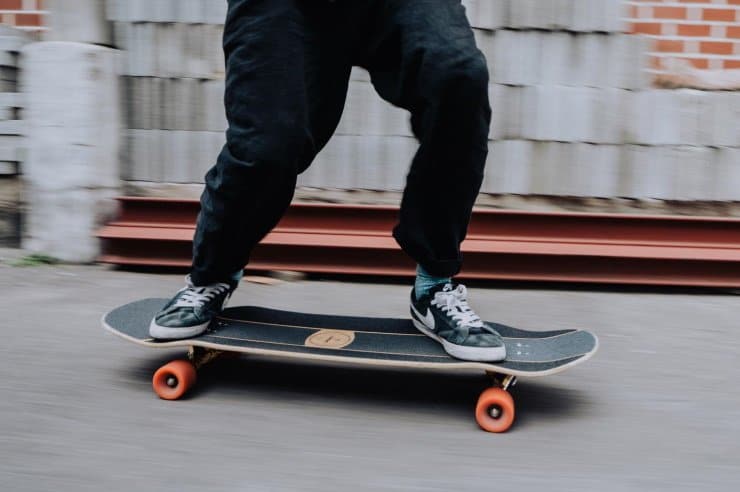 The Overland is Loaded’s iconic midsized hybrid longboard. Over 6 years after being first introduced, it’s still one of the best hybrids boards on the market.

The Overland is touted as an all-around board but clearly has a string focus on a combination of street riding and tricks and downhill freeride. Here’s a recap of the Overland’s distinctive features:

Clearly, the Overland was built with both street skaters and freeriders in mind. Let’s take a closer look.

The Loaded Overland is 37″ long by 9.5″ wide, with an adjustable wheelbase of 20.75″ to 22″ which allows for two mounting options – one for TKP (street) trucks, the other for RKP (longboard) trucks.

When seen from above, the Overland looks like an oversize city cruiser with a wide and meaty 6″ tail and narrower angled 5″ nose.

The deck spans across the wheels like a cruiser which makes it well-suited for street riding. The big kicktail and steep nose kick are designed for ollies, manuals, and kick tricks regardless of the board’s size.

The Overland’s double kicks and shorter wheelbase option give this board an astonishing amount of pop for a board this size. The kicks combined with TKP trucks allow for radical ollies, slides, manuals, grinds and shuvits, essentially turning the Overland into an XL street deck.

Meanwhile, the longer (outer) wheelbase option can combine with RKP trucks to make the Overland an amazing freeride and sliding board. The long option lets you ride between the trucks for pumping. The big tail also enables surf-style riding (see the Surf n Turf setup below).

The slight flex and tapered waist of the Overland also contribute to give this board its carving and pumping abilities. The thinned waist makes for faster with rail-to-rail transitions, while the flex adds energy return to your carves.

The Overland is rockered and has mild concave for a safe “suck-in” feel when freeriding & sliding. The concave runs along the full length of the board and is steeper in the front than in the back.

The rocker and concave are complemented by the board’s wheel flares which provide reference points when riding fast and add extra wheel clearance.

Check out the Loaded Overland here

The Overland’s thin and super-lightweight construction is similar to the Loaded Poke – both boards offer a subtle flex that make for a responsive ride for carving and pushing albeit without hurting the stability and “trickability” of these boards. The Overland is a breeze to whip around.

The Overland has an added bottom layer made of texturized urethane which further reinforces and protects the outer fiberglass layer, e.g. during rail slides, and makes the board more “grabbable” including when wet.

The deck’s grip tape is also optimized for a hybrid riding style. A strip of coarse grip line the rails to ensure a solid foothold during slides and fast turns. In the center, meanwhilè, mild griptape runs lengthwise from tail to nose for minimal interference during ollies and kick/flip tricks.

The Overland and the Cantellated Tesseract look quite similar in shape and size at first sight (the latter is only 1″ shorter in length). However, there are some important differences between the two boards that make them suited for different types of riders and styles:

Another version of the Tesseract, the Basalt, is a double-kick shape similar to the Overland, also with freestyle capabilities. However, at 39″ it’s a significantly bigger board, and not as versatile because of its strong concave and stiffer flex.

If you’re looking for a top-of-the-line hybrid midsize longboard you can push, carve, freeride, and most importantly, kick flip and whip around in city streets and skateparks, the Overland is your guy.

This board been around for years yet hasn’t lost an ounce of popularity. It’s strong and durable, thin and lightweight, comfortable for city commuting, capable for pumping, and stable for freeriding.