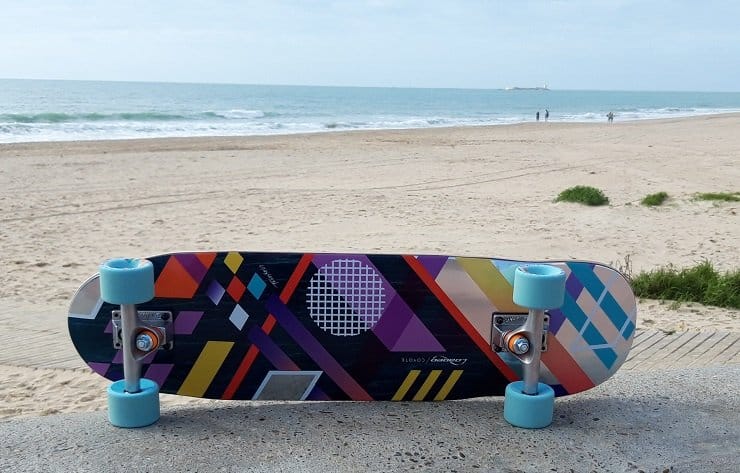 The Coyote is Loaded’s new compact city cruiser and slasher, and their first maple deck ever. The size of a regular street deck, it fits in a locker, can be strapped to a backpack, and is highly trickable. Unlike a regular skateboard though, the Coyote’s directional shape, wheelbase, concave, and big soft wheels make it a very capable, fun, and fast city commuter board.

The Coyote is essentially a re-creation of the popular Kut-Thaka slasher, which was cut out of surplus Kantaka decks and was then quickly discontinued.

At $199 for the complete and $79 deck-only, the maple-built Coyote is more affordably priced than the defunct Kut-Thaka – and than most other Loaded completes. Although pricier than other best-selling city cruisers like Landyachtz’s Dinghy or Tugboat, the Coyote arguably offers a much smoother and more comfortable ride. Read on to find out why.

What is the Loaded Coyote good for?

The Coyote is designed to be a fantastic city cruiser and slasher. It’s a very versatile board, great for cruising and moving around city alleys and sidewalks, doing kick and flip tricks, surfing ditches, and even riding bowls.

These are some of the Coyote’s main strengths:

The Coyote deck is a 30.75″-long by 8.375″-wide directional cruiser shape with a large kick and a broad nose. It’s large enough to be comfortable but small enough to be very nimble in the streets.

Contrary to its Kut-Thaka ancestor which was built with bamboo and fiberglass composite, the Coyote deck has a reinforced 7-ply maple layup with thicker-than-normal cross veneers for added stiffness, pop, and cushioning.

Like many other Loaded boards, the Coyote has a rockered profile resulting in a slightly lowered ride. The elliptical concave creates a cross-sectional curvature with uplifted rails for solid foothold.

Compared to other decks like the Omakase, however, the Coyote has a more tame concave as the edges have been rounded out somewhat with a less aggressive widthwise curvature for better riding comfort.

Similar to other decks in Loaded’s lineup, the Coyote’s wheel flares are very effective for removing wheelbite in tight turns and slides. The significant flares also provide enough clearance for many sorts of setups with varying truck/wheel sizes.

The wheel flares are also an integral part of the deck’s contour, offering helpful reference points for foot positioning, particularly when riding fast.

The relatively large kicktail (roughly 5.5″ as measured by myself) gives you strong leverage for ollies and kick turns, and combines with the rear wheel flare to create a nice pocket for securely tucking your back foot.

The Coyote’s nose is rounded and relatively wide for comfortable forward riding, with a nice small upturned kick (about 2.5″ as measured by yours truly) for catching ollies and performing nose manuals.

The Coyote boasts a very attractive design on the bottom, with bright colored geometric patterns and mirror-like silver patches on a dark green background.

The artwork is signed by local Los Angeles artist and muralist Teddy Kelly. Loaded has plans to set up collabs with different artists for upcoming versions of the Coyote.

The top side of the Coyote deck has a beautiful purple-shaded veneer, though the latter is largely covered by the medium-coarse Jessup grip tape and only shows through the circle and stripe cutouts in the grip tape.

The new design is just as colorful as the old one, but this time with a dominance of blue, orange, and yellow – colors reminiscent of the Latino roots of Mexican artist and muralist Hola Lou who created the art design. Love the new art on this board!

UPDATE: Loaded’s newer Carving & Slashing option ($215) has the 150mm version of the Paris V3 for a deeper carving feel. The smaller trucks are best-suited for street-style riding with a snappy response and the wheels sticking out less.

The Paris street trucks have a taller profile than standard conventional trucks which results in better clearance. The Coyote’s trucks are also fitted with 7º wedged risers for smoother and more fluid carving and commuting.

The Coyote’s all-around setup includes Orangatang Fat-Free wheels with a 65mm diameter and 80A durometer. These wheels work great for a mix of smooth cruising, tricks, and freeride/slides. They come mounted with Loaded’s quality Jehu bearings with integrated spaces.

Some riders fit the Coyote with Carver trucks for surf-style pumping and carving. While the Coyote deck is too narrow for the larger CX or C7 trucks, the C5 truck set works quite well with this deck.

Is the Loaded Coyote right for you?

The Coyote is a special mini-cruiser, with a size in-between the Dinghy and the Tugboat though with a significantly longer wheelbase. It has a more durable construction than most cruisers on the market, and bears Loaded’s seal of quality.

Some riders argue that the Coyote’s longer wheelbase keeps it from being a true mini-cruiser. Others, however, feel the Coyote has all the capabilities required from a mini-cruiser and more, including super-smooth cruising, freestyle capabilities, and even freeriding abilities.

So while the Coyote has a higher price point than a typical mini-cruiser, many riders feel its style, strength, riding experience, and speed handling, all in a compact package, make it unique enough to justify the difference.

The Coyote also gets its legitimacy from inheriting the shape and features of the well-liked Kut-Thaka. With the recommended setup, however, the Coyote offers even more of a versatile and smoother ride than the regretted Kut-Thaka.

Check out the Coyote city cruiser complete on the Loaded Boards site.