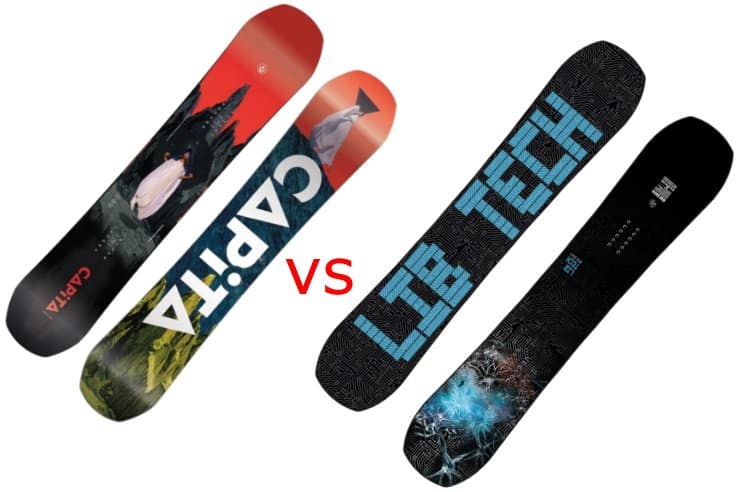 The Box Knife has the edgehold of a knife and is a great carver and pipe sled. The DOA combines the best of a camber and rocker profile, resulting in a ride which can carve groomers, cut through powder and tree lines and attack the park with confidence.

The versatility of these boards have been praised by professionals, from park rats to pipe masters.

Lib Tech Box Knife vs Capita DOA: who are these snowboards best for?

The Lib Tech Box Knife is good choice for those looking to carve hard and low. With excellent edgehold and a medium/soft flex, it’s great in the park and can jib, butter, hit kickers and side hits with precision.

While not outstanding in powder, this board rides solid in the pipe.

The Box Knife has a hybrid camber profile which is forgiving (though not really beginner-friendly). The flex of the board strikes a good balance between hard and soft, making it ideal for groomers and untracked powder pockets.

With an extended nose and tail, the Box Knife is a fun freestyle board which has more dynamic pop than other camber boards. It meshes the playfulness of a park board and the strong edgehold of a carving machine.

The DOA is an aggressive freestyle all-mountain board for the high-end park rider who likes to push boundaries. This is an advanced to expert sled for the all-rounder rider who spends time between backcountry, groomers, the park and pipe.

Capita designed the board with its Resort V1 profile – a hybrid camber profile with camber between the feet and rocker towards the tip and tail. It’s a technical board for air junkies.

With a medium flex rating, the DOA has the pop and flex of a camber board with the predictability and easy turn initiation of a rocker board.

Both boards are true twins, ideal for freestylers who like to pop into switch and land jumps fakie.

Considering neither board was designed for powder, they don’t over-disappoint in soft snow. Although centered, the Box Knife has an elongated rockered nose and tail which give it decent float for a twin board.

When in deeper powder, you’ll have to put some effort into keeping your front foot lifted to avoid the nose from sinking.

If you’re used to riding a camber twin board in powder, the DOA wouldn’t be much different and might be easier because of its flex and pop.

The flex rating is softer towards the tip and tail, allowing you to manually lift up your front foot to float through powder. While this is possible, avoiding catching an edge is sure to give your back leg some flack.

While we recommend having a back-up board for soft powder days, the DOA will function adequately in light snow pockets but won’t do so well to float above deep and heavy powder.

Overall, with a longer nose and tail, the Box Knife floats through powder with more ease than the DOA.

As the name suggests, the Box Knife has a knife-like edgehold that will hold you stable at speed in hard and icy conditions. It has a mild rocker between the feet and camber underfoot and is built with Lib Tech’s serrated knife edge hold technology.

This camber and edge hold help to cut very sharply through hard carves. While long and low riding carves are definitely possible, this board works best in tighter radius carves, and is very agile from rail to rail.

The Capita DOA carves well, but is nothing special. It’s easy to carve on groomers when riding switch, however, it doesn’t bring the magic on low rail to rail carves.

The edgehold on hard and icy snow isn’t fantastic either, and it’s easy to catch an edge with the centered camber and rocker under feet.

For short to medium radius carves, both boards can snap back and forth with good control.

With its serrated knife edgehold, the Box Knife outdoes the DOA in the carving department and is a better choice in unpredictable icy and hardpack conditions.

As mentioned, the Box Knife favors tight turns from rail to rail. It’s a great feeling laying into a turn on this board, which has fast turn initiation and delivers a lot of spring between turns.

It’s ideal for tight spaces and will go wherever you want it to without issue.

Turning the DOA has a locked-in feel because of the reverse camber emphasis at the tips. This gives the board a mechanical feel which is manageable for advanced and expert riders.

On the Capita DOA, because of the extra flex towards the tip and tail, tight and snappy turns are fast from initiation through to completion. The transition from rail to rail is quick, and tight and medium radius turns feel easier to control than long, drawn out carves.

Skidded turns aren’t too easy on the DOA, which is an issue for beginners who rely on skidding to stop. It’s easy to catch an edge when skidding on one edge.

If we had to pick, we would choose the Box Knife as a better turner because of its unmatched edgehold in all conditions.

Both the Box Knife and the DOA shine most when cruising slowly, helped by the board’s stronghold in short and medium radius turns.

This is ideal for those looking to spend time in tight and unpredictable tree lines.

These boards are very stable and maneuverable at slow speeds and are therefore great for technical riding in tight spaces.

The Box Knife can handle speed well and has a lot of stability considering its soft flex, however, can get iffy when you really open it up.

It’s not the best board for gathering speed and acceleration and needs steep terrain to reach its potential. Once you have speed, the long nose makes for a chattery ride.

The DOA, on the other hand, with its damp base enhanced for speed, cruises from rail to rail on soft to medium snow with ease. It can hold its speed well in a range of conditions, especially when approaching kickers and jibbing off natural mountain features.

The DOA picks speed up well and maintains stability on groomers, however the flat section in between the camber and rocker is an edge waiting to be caught if you lose your concentration.

Neither board is ideal for bombing steep cliffs at speed and are more  all-mountain, all-rounders mixed with a twin freestyle board.

With its strong edgehold and efficient tight turns, the Box Knife can weave around bumps with ease. Its narrow width and forgiving flex make it almost enjoyable avoiding churned up snow.

However, slashing through uneven snow is a different story and the board feels very vibrational and bucky.

The Capita DOA isn’t too comfortable for skidding through bumps and chop either, but for a medium flex twin, it powers through rugged terrain relatively well.

Paired with some shock absorption bindings, this board can ride over rugged terrain with relative ease, but this isn’t to say you won’t feel every piece of chunder beneath you.

On a positive note, Capita built the DOA with Kevlar S wrap on the base, a material used for bulletproof vests, which takes on the brunt of the bumps and protects the base of the board from breakages.

With more sidecut and shock absorption, the DOA is likely to hold up better than the Box Knife in rugged terrain.

The Box Knife has great pop in the tip and tail and is ideal for ollieing. With its narrow body and softer flex, the board does better on small to medium kickers than big ones and has strong take-off and landing abilities.

These features also make the board a solid pipe board. It’s easy to make swift turns on the walls and throw the tail around in the air. The edgehold is essential for icy pipe walls and the board’s camber is ideal for driving speed through wall to wall.

If you’re looking for a jibber, this board has enough pop and flex to develop your confidence.

The Capita DOA is a well-balanced park board. The flat camber profile offers a stable area to press and flex on when approaching jibs and jumps. It tracks well when approaching kickers and is a great option for those who like to pop off at every opportunity they get.

The medium flex is great for landing kickers and for snapping into the air with an ollie. The board is designed with a light-weight carbon fiber core, which increases its response while keeping it super light.

The DOA has a lively feeling flex which can energetically pop and flex into shape with the right amount of power, ideal for jibbing.

The DOA isn’t designed for the pipe, however, and is a bit tracky on icy walls with its limited edgehold.

Overall, both boards are great park boards and have a lot of energetic pop and flex. The Box Knife is a better pipe board while the DOA is a great jibber.

Riding switch on both the Box Knife and DOA is close to perfect. With symmetrical true twin centered stances, the boards feel stable and maneuverable under foot when riding switch.

The Box Knife is an all-rounder ‘one quiver wonder’ which strikes a balance between playful and technical. It’s a fantastic board if you don’t know what the conditions will throw at you and whether you’ll be spending time popping off kickers in the park, snapping between turns or doing hard and long carves on corduroy groomers.

While the DOA shines best in the park and on friendly groomers, it’s also a solid all-rounder which offers consistency in versatile conditions for a decent price. 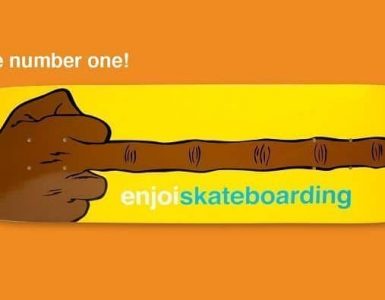 Enjoi Skateboards is one of the newer core skate brands co-created by Rodney Mullen and distributed by the Dwindle Distribution, a world-leading board sports distribution company now part of the Globe group. Much... 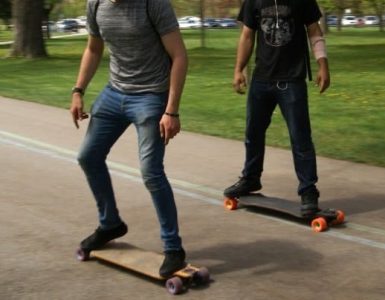 How To Longboard: An Easy Guide For Getting Started

Longboarding is an awesome sport. If you’re just getting started, learning how to longboard involves acquiring certain skills that will keep you safe and make riding a smooth and cool experience. I’ve broken... 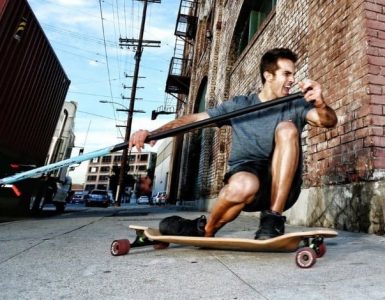 Land paddling, aka street SUP is an alternative longboarding style that mixes longboard skateboarding with elements of water-based stand up paddleboarding. With land paddling, you propel your longboard by pushing on the... 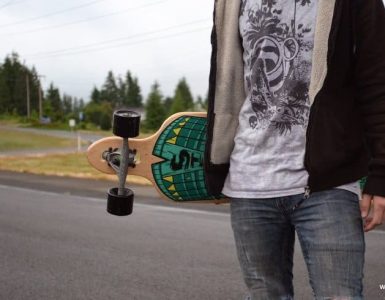 How to Carry a Longboard

Why a post about how to carry a longboard ? If you’ve been longboarding for a while, you’ve probably been faced with this question. A longboard can be quite bulky and there are many situations in which you...