Flow Skateboards Review: The New Surf Skate On the Block 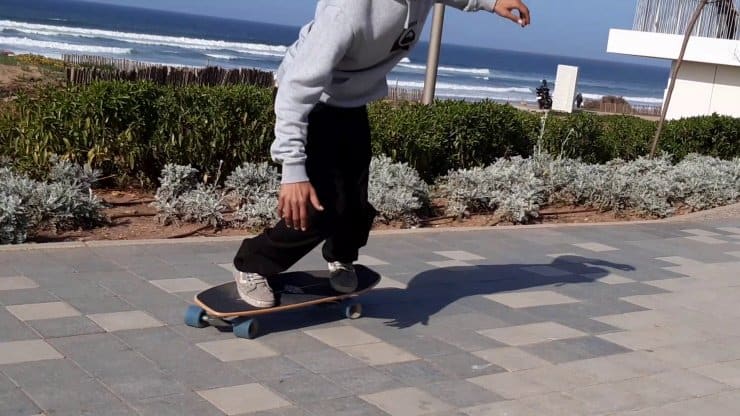 Flow Surf Skates is a hot newcomer on the surf skateboard market. Flow skateboards, like other surfskates, are designed to emulate the feeling of ocean surfing on concrete through tight carving and efficient pumping. What really sets the Flow boards apart, however, is stability despite super-tight turning, and price to quality ratio (list price around $160).

The Flow’s stability and low price makes them excellent starter boards for beginner surfskaters. On the other hand, seasoned concrete surfers are also in for a nice experience with these boards.

Read on for more!

The Flow brand was created at the end of 2018. The company’s developers design, create, and source the boards from the U.S. Origin uses the same design and product team for Flow as for the other flagship brands in their portfolio. This means rigorous dimensional, durometer, and hardness tolerance inspections for each production run.

Flow surf skates are currently sold mainly online through Amazon and via a select group of local and international retailers. Origin is currently putting together a rider and influencer team which will start promoting the Flow boards later this year.

The Flow complete skateboards are priced significantly lower than other surf skate brands – which typically have price points well above $200.

Check out the pricing for the Flow Surf Skates on Amazon

The Flow decks are designed around the Flow surf truck, which results in a strong cohesive complete skateboard. Like Origin’s other leading brands, the decks are produced with a strong quality focus and come with a 1-year limited warranty on manufacturing defects.

The 7-ply Flow decks are quite durable and hold up very well to daily use. Some early Flow surfskate retailers still have their 2018 test board in great condition despite near-daily use.

The Flow surfskate comes in two distinct models, the Wedge and the Swell, which differ by their deck size and shape.

The Wedge has a more compact shape than the Swell, 32″ in length and slightly narrower, with a shortish 18″ wheelbase for snappy cutbacks. This model has a distinctive blunted nose giving it a stylish and modern profile.

The Swell, on the other hand, is slightly longer at 33″, with a 19″ wheelbase. It has a classic surf-style cruiser shape with a tail kick. The relatively wide standing platform allows for comfortable foot positioning. The raised rails allows good leverage and responsive carving.

The Flow Surf Skate front truck is designed to emulate the feeling of riding a surfboard. Like the Carver C7, YOW, and Swelltech, it uses an internal spring mechanism to pull the truck back into place when turning. The spring results in snappy maneuvers, flowy carves, and efficient pumping.

Spring-loaded surf truck systems, as opposed to bushing-based ones, are the surfiest and most flowing. Not all spring-based trucks are created equal though. The various surf trucks on the market differ significantly in terms of looseness, turn, snappiness, pumping, smoothness, and lean/stability. See “riding experience” further down.

A common complaint with regards to spring surf trucks is the tendency of springs to snap over time. This affects most spring-loaded trucks (again, Carver C7, Swelltech, YOW etc). Flow’s surf truck comes with a lifetime spring warranty, though Origin reports having had very few claims so far.

One of the Flow truck’s strong points is its adjustability – something not all surf trucks have. The Flow truck has 2 settings for tuning the spring tension and turning axle tightness. The ability to adjust the front truck makes the Flow more suitable for all kinds of rider builds and levels, and riding preferences.

Like most surf skate systems, the rear truck on Flow boards is a stable, regular TKP truck that acts like a fin on a surfboard in the water.

The Flow wheels are made from a high-quality urethane mix. With a 69mm diameter, they are large enough for fast rolling and smooth carves. The wheels have a square-lip profile, a wide contact patch, and a 78A duro, make them super-grippy for very tight surf carves.

The durometer is medium soft, ideal for cruising on many types of terrain. Longboard wheel duro generally ranges from 70A (very soft) to 83A (hard). The Flow’s softish durometer makes the wheels smooth-rolling and shock-cushioning when rolling over obstacles.

The stock Abec-7 bearings are also good quality and keep the wheels spinning for a long time – they roll even better after you break them in for a while.

I’ve been riding the Flow Wedge 32″ for a few weeks now and I can say I’m quite impressed with this new surfskate, which has become my main board of the moment for city slashing and surfing.

For those new here, I’m 6’1, 180 lbs, a long-time ocean surfer, but not a hardcore skater. I’ve tested a lot of surfskates for this blog, including Carver, YOW, Swelltech, Slide, Miller, and more.

The riding feel on the Flow is different from the others. The first thing you notice is, the board is extremely reactive and turny, as the slightest pressure on a rail makes the wheels significantly.

On the other hand, the Flow feels very stable because the deck has limited lean. When you press on a rail, the deck doesn’t dive as much as other surfskates. It only takes a slight lean from the horizontal plane to cause a lot of wheel turn.

Pumping on a Flow surfskate

Since the deck doesn’t lean much, using a heel-to-tow sort of motion for pumping like with some others surfskates doesn’t work. It feels like the deck hits a stopper each time your press on a rail with you toes or heel.

Instead, the get the Flow pumping, you use a surf-like body motion that originates from your core. On the Swelltech, for example, due to the very strong lean, that motion must start with your shoulders. With the Flow, you can get the motion going easily from your mid-body and hips, although a shoulder-lead motion also works well for surf training.

Since the wheels turn very quickly without much deck lean, using a surf-style hip rotation makes the Flow pick up speed fast, including from a standstill and uphill – this board is one the most efficient uphill pumping surf skate I’ve tried so far.

Carving on a Flow surfskate

As mentioned, the carving on the Flow is surprisingly tight as it takes very little pressure to make the wheels turn. It does take a little getting used to, again because you expect the rail to dig deeper when carving.

My test board is the Flow Wedge. The wide blunted nose allows you to put your front foot far up on the nose, closer to the front truck. This gives you good leverage for carves and results in very sharp turns.

Back-foot driven carving is possible on the Flow – unlike some other surfskates. Your back foot should ideally be positioned in the pocket at the base of the kick. The focus on the back foot is not as pronounced as on the Swelltech, however.

Carving on the Flow is different from the YOW or Swelltech since you don’t “sink the rail” as much. Yet, the board is highly responsive and turns on a dime, but with better stability – a clear plus for newer surfskaters.

Pushing on a Flow surfskate

Another distinguishing point of the Flow is the front truck’s low height. On most surfskates, the deck sits quite high off of the ground, since surf trucks like Carver or Swelltech are much taller.

Consequently, I find the Flow to be one of the easiest surfskates to push on like a regular cruiser, which is great for transport riding as you can comfortably alternate between pumping and pushing.

In spite of the truck’s low height, I haven’t experienced any wheelbite whatsoever, no matter how tight I turned. This is due to the limited deck lean – a strong incline would bring the deck closer to the wheels in tight turns. When pressing hard on the Flow’s rail, the turn mechanism stops the deck rail to sink too close to the turned wheels.

Tricks on a Flow surfskate

Due to its trucks being lightweight, the Flow complete is lighter and much easier to pop off the ground as compared to other surfskates I’ve tried – it’s also much easier to carry around.

Also, the Flow’s small kick is surprisingly effective for doing olies and hopping on and off curbs. Added to the surfskate’s unusual stability, this gives you great confidence to hop over small obstacles when riding sidewalks.

The Flow also has a very decent concave with uplifted edges, keeping your foot tucked when riding on/off curbs and down small inclines. On the Wedge, the wide blunted nose also adds comfort and control for trying manuals and other tricks.

The quality grip tape on the Flow is also comfy, grippy enough for strong foothold yet not too coarse as to keep your feet glued in place – you need freedom to change your stance when surfing. The finer grip tape also doesn’t destroy your clothes when carrying the board.

Downhill on a Flow surfskate

Though I haven’t tried taking the Flow very fast downhill, carving down small hills is nice and easy due to the wide platform and nose (on the Wedge) and effective concave.

The relatively long wheelbase for the size (18″-19″) and the low lean makes the flow a stable board. The surf truck’s responsiveness, however, means you probably should have good skills before taking this board to high speeds.

The Flow deck shape is fit for sliding, although due to the stability, small deck lean, and uber-grippy wheels, it takes a really strong push to break traction. Smaller/harder wheels will surely improve the Flow’s ability to slide.

Check out the price for the Flow Surf Skates on Amazon

All in all, the Flow is an awesome surf skate. It’s extremely versatile as it works great as a regular cruiser, a distance punping and pushing board, a nice city slasher, and a great surf trainer for beginner surfers.

The Flow fills a new space in the surf skate spectrum, in between the hardcore surf trainers like the YOW or Swelltech, and the more stable and beginner-friendly Carver or Slide.

The Flow is lightweight, surfy, stable. It can be used for commuting, surfing, pumping, and small tricks. It would probably do well at the skatepark too. It’s also the most affordable of its kind. A great new option for new surfskaters.