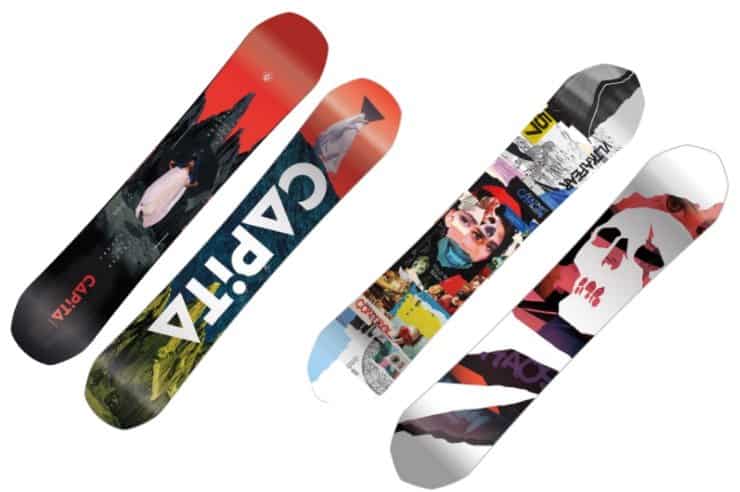 The Defender of Awesome (known as the DOA) and Ultrafear are two of Capita’s most in-demand park snowboards.

The Capita DOA is a true all-rounder freestyle snowboard consistent in most conditions. It’s all about stability, powerful butters and airs. The Ultrafear is a jibbing machine, ideal for advanced park riders and confident all-around riders who are still learning to ride park.

While both boards are designed for capable riders who enjoy playful park sessions, the DOA is more suited towards those looking to combine park, groomers and back country into one all-rounder board. The Ultrafear is a softer ride crafted for those wanting to add a specific park board to their quiver.

The DOA has a hybrid camber profile which Capita calls the Resort V1. It has a slight camber between the feet, flat underneath the bindings and a rocker kick towards the tips.

The Ultrafear has a reverse camber profile with zero camber between the feet, rocker underneath the bindings and a dramatic flick at the tips.

Capita DOA vs Ultrafear: who is the board for?

Capita is known for designing some of the best park and urban snowboards on the market. Their DOA is an aggressive freeride model built for the all-rounder who likes to push limits in all-mountain conditions.

This is a technical freestyle board for advanced riders who spend 50% of their time in the park and 50% on groomers and backcountry. It’s said to be one of the most versatile freestyle boards around and is praised for being able to bomb cliffs, carve down groomers and jump kickers.

Although it is designed with the park in mind, it’s a high quality all-rounder which should not be underestimated because of its modest price.

The Ultrafear is a more playful freestyle board ideal for jibs and butters. This board is designed for street riders with an itch to hit every fallen log they see.

The Ultrafear has a super soft flexy feeling and is great for pivoting and riding switch. While it inspires confidence in the park, it does not ride as seamlessly on other parts of the mountain.

Boards labeled with a W are wider models and are great for those with a toe hang. The Capita Birds of a feather is the female version of the DOA.

These boards were created for park rats. The flat camber profile on the DOA is ideal for landing jumps and its medium flex gives enough pop to ollie into the air.

If you’re looking to kick off everything you see, ollie into switch and do small kickers on the regular, the Capita DOA might just be the park board you’ve been searching for.

The DOA uses carbon fiber technology which increases its pop and response on kicker take-offs and landings while staying super lightweight. While this board requires a bit more leg power than the Ultrafear, once you put enough energy into it, you’re guaranteed a lot of pop and flex back in return.

Neither board has great edge-hold and is ideal in the pipe. However, the Capita Ultrafear’s flat bottom and soft flex fare well for pipe tranny landings, as the tips forgivingly absorb the impact and allow you to pop back up with ease.

The Ultrafear wins when it comes to butters and jibs. You’ll be shocked at how easy it is to lean back and flex the board into a butter. When buttering on the DOA, you’ll need to load a lot more power into your back leg to handle the stiffer flex.

The flex in the Ultrafear feels softer than advertised. If you’re looking to try new tricks, this board will be able to instill some park confidence in you with its stability, pop and flex.

One of the top jib boards out there, it will give you more control than you’re used to. There’s no real evidence why a flat camber profile would have so much pop, but it is surprisingly responsive when ollying off flat terrain.

Don’t try to hit big kickers on this ride. Besides being too soft and skittish for big landings, merely gathering speed to launch could land you in trouble.

Considering neither boards were designed with powder in mind, they aren’t too disappointing in soft snow.

With a centered stance and little space to set your bindings back, the DOA doesn’t float too well and will give you a leg cramp after a day in powder. It rides relatively well through light snow pockets but digs its nose in deep powder.

While it’s acceptable to ride these boards through the occasional powder section, it’s recommended to have a back-up board in your quiver for more extreme powder conditions.

Carving is not the DOAs strong point. You’ll manage a short or medium radius carve but won’t be impressed with the outcome of a hard long carve.

It’s tricky to ride rail to rail without sliding out or catching an edge with the center camber profile. The edge-hold is not great and is least reliable in hard snow or icy conditions.

The Ultrafear doesn’t have optimal edge-hold either, but it’s more manageable and grippy enough to hold onto medium to soft snow. Like the DOA, carving through hard pack snow or ice is tricky.

While the Ultrafear is able to hold onto long carves marginally better than the DOA, you won’t feel much pop as you come out of a carve to entice you to want more. Big carves will expose the true flat base of the board.

On a positive note, while one would expect a board with such a flat base to spin out, the Ultrafear doesn’t spin out that easily. Transition from edge to edge is possible but would generally be better on a board with a camber profile.

For short to medium radius carves, however, both boards can snap back and forth with good control.

Check out the Capita DOA here on Evo or on Amazon

Turning the DOA has a locked-in feel because of the reverse camber emphasis at the tips. This gives the board a technical feel that is acceptable for an advanced rider but isn’t for everybody.

The camber base profile doesn’t make it easy to skid turn without catching an edge. This makes this snowboard not as suitable for beginners who rely on skid turns to stop.

In contrast, skidded turns are easy to do on the Ultrafears’ flat base. It’s even possible to spin around on the base without catching an edge. This board is more forgiving and you can skid to a stop if you slip-up on a turn.

Tight and snappy turns (done when correcting an approach to a kicker) are fast from initiation through to completion on both boards. The transition from rail to rail is very quick and the boards are easy to control when doing short radius turns.

Neither the DOA nor the Ultrafear are go-fast boards, and both feel more controlled when riding slowly. This, along with easy jibbing on fallen objects makes them great boards for technical riding in small spaces where there might be trees and rocks.

The DOA in particular has a lot of stability and is easily maneuverable when riding slowly.

The DOA has a damp base which gives it extra speed. You’ll be able to ride fast between rail to rail on medium snow, but it doesn’t offer the best snow edge-hold and can slide out of control when riding fast on hard-pack snow.

As mentioned, the Capita DOA is by no means a speed bomber but more of an all-mountain board packaged into a twin directional.

The DOA will pick up and hold speed on groomers well and will feel stable under your feet. If you slip up at speed, you could skid over the flat section of the board and catch an edge. Sliding out at speed is a reality and there’s no space for lazy technique with this board.

On the Ultrafear, you’ll experience some dramatic chatter and bouncing when riding fast. This is expected for a board designed for jibs. That being said, if you’re able to endure the vibrations, the board can be speedy.

While neither are created for speed, the DOA probably has the edge for riding fast because of its medium flex absorption and damp base which is able to absorb extra wax.

Check out the Ultrafear here on Evo or here on Amazon

While it’s neither easy nor comfortable to skid over bumps on the Capita DOA, for a medium flex twin with limited sidecut, it powers through chopped-up terrain surprisingly well.

This isn’t to say you won’t feel every bump and chop you ride over. The core does not suppress ice chattering very well and even paired with shock absorption bindings, rugged terrain can take a toll on your knees.

The Ultrafear has comparatively better shock absorption and is great for cruising over bumps slowly. The boards’ soft flex hugs bumps and chatter when riding over them at slow speeds, absorbing uncomfortable vibrations.

That said, with such a soft flex base, the board doesn’t do well speeding over big moguls and bumps. All in all though, the Ultrafear holds its shape in choppy terrain.

Both boards are true twin setups which are great for riding switch. The flat base of the Ultrafear in particular allows for an easy transition between switch and regular with low risk of catching an edge.

If you’re on a hunt for a true all-rounder freestyle board which is consistent in most conditions, the Capita DOA is the way to go. This board is all about stability, powerful butters and airs. The DOA is the ideal “go everywhere, do everything” weapon to add to your quiver.

The Ultrafear is geared towards park and urban riders who aren’t in the market for an all-mountain board. This snowboard is ideal for advanced park riders and can also be great for seasoned riders in other areas who are still learning how to ride in the park.

If you ride at a small hill with a park regularly, you will be able to put this jibbing machine to great use.