Can You Wakesurf Behind Any Boat? No, You Can’t, Here’s Why 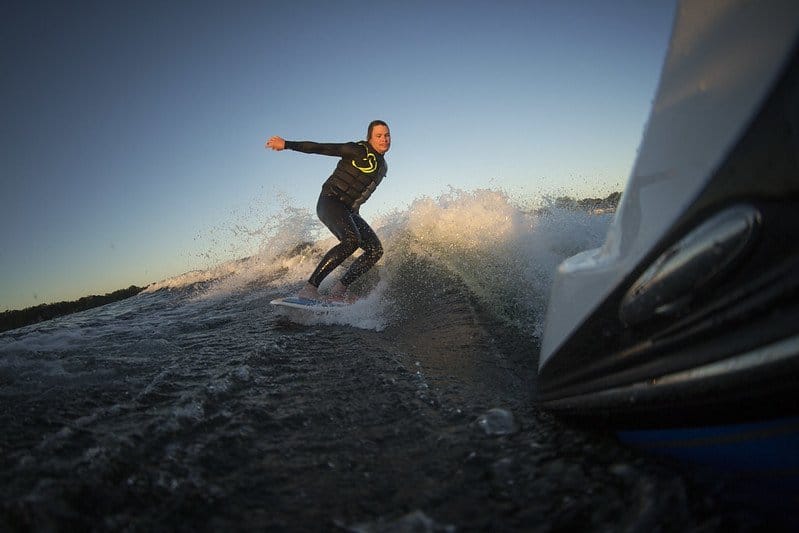 Wakesurfing is awesome, a hybrid between surfing and wakeboarding. In wakesurfing, however, the type of boat you ride behind is super important – it can even be a matter of life and death!

To stay safe, you should only wakesurf behind a boat whose propeller is not exposed in the back. True wakesurfing involves riding less than 10 feet behind the boat, so it should only be done behind an inboard or V-drive. Wakesurfing behind an outboard is very risky as you may hit the propeller.

So does this mean you can’t wakesurf unless you have access to an inboard boat? There are actually things you still can do to have safe fun on a wakesurf behind other types of boats.

Some boat owners also believe that adding certain features to their outdrive can make it safer for wakesurfing. Let’s take a closer look.

See also:
Wakeboarding vs wakesurfing: which is easier & more fun?
Wakesurfing vs surfing: how do these awesome sports compare?

Types of boats suitable for wakesurfing

Wakesurfing is similar to wakeboarding in that they both involve riding a board behind a motorboat. In wakesurfing, however, the ultimate goal is to let go of the rope and freely surf the boat’s wave, gaining enough speed in the wake to follow the boat without any pull.

Surfing the boat’s wake without towing requires staying very close to the boat’s stern, typically at a 3 to 6-foot distance. Therefore, if the boat has a visible propeller out its back, you’re exposing yourself to serious or even deadly injury!

Inboard boats, including direct drives and V-drives, are the only types of boats you can safely wakesurf behind. In both these types of boats, the engine and drive unit are placed inside the boat, and the propeller comes out under the hull in front of the transom.

In these types of boats, hitting the propeller is unlikely as it would involve reaching further forward and a few feet under the boat to get to the prop from the riding position.

Outboard boats and stern drives (aka inboard/outboards or I/O), on the hand, are not suitable for wakesurfing as in these types of installations, the propeller and exhaust stick out the back of the boat and are thus very close to the wakesurfer.

In a stern drive, while the engine itself is mounted inside the hull, the drive unit and the propeller are outside the back of the hull and attached through the ransom.

In an outboard boat, the whole unit (engine and transmission) is mounted outside the boat to the transom, which makes it very easy for a wakesurfer to hit the prop and inhale the fumes from the exhaust.

To recap, you should ONLY wakesurf behind an inboard board, never behind an outboard or inboard/outboard (stern drive) due to the risk of making contact with the propeller and the proximity of the exhaust.

Risks of wakesurfing behind an outboard or I/O

As explained above, when riding closer than 10 feet to the propeller of an outboard or inboard/outboard, you put yourself in danger of losing a limb or your life – there are accidents where riders get cut in half by a boat prop.

Newbies often tend to believe the risk is overrated because the boat is constantly moving forward and so it’s unlikely for the wakesurfer to make contact with the propeller behind the boat.

However, be aware that, while the boat is typically going at a steady speed, the wakesurfer is carving up and down the wave at varying speeds, and can catch up with the boat riding down the wave. The surfer may fall at that point while going faster than the boat and hit the engine.

Also, the boat may slow down unexpectedly while the wakesurfer is riding up the wave toward it. Falling forward into the propeller is a true possibility.

Even wakesurfing behind a direct drive does not completely preclude such accidents as it’s quite easy for a surfer, particularly in a big wake, to come up on the back of the boat very fast.

Wakesurfers actually do that all the time and ride up to the swim platform for grabbing a beer or switching surfers while the boat continues at the same speed.

Safe surfing behind an outdrive

In spite of the above facts, you’ve probably often heard people mentioning how they wakesurf behind their outboard or stern drive boat. You can indeed ride a surfboard behind an outdrive safely using a tow rope.

Wakesurfing with a rope is done at a distance and rope length similar to wakeboarding, making it unlikely for you to ride the wave down into the outboard’s prop.

Purists will argue this isn’t real wakesurfing, as the latter involves riding the wave without a rope. Some people call this “skurfing”. Whatever the name, this variant lets you surf an outboard wave without risking a limb.

The main difference with wakeboarding is that you’re riding a surfboard without straps or bindings, which also makes it much more challenging to get up at first.

Boarders typically use a 15 to 20 feet rope for wakesurfing – this still feels pretty close to the boat if you’re used to wakeboarding.

Another difference with wakeboarding is that wakesurfing is done at slower speeds, typically 10-14 mph (vs 18-23 mph), so falling is usually not an issue.

You can have a lot of fun on a wakesurf riding up and down the wake and cutting back and forth close to the wake on a surfboard, pulling 180s and 360s. Never let go of the rope or try to pull up closer to the boat, though, to avoid any risk of hitting the prop.

In an outboard or I/O, going 12-14 mph with the drive trimmed up slightly, you’ll likely get a 3-foot wave about 25 to 30 feet behind the boat. You can still have fun tow surfing that small wave even without being right in the curl.

Other important boat features for wakesurfing

As mentioned, with an outdrive type boat, it’s hard to create a strong enough wave to be able to ride without rope at a safe distance, even if you add a lot of ballast, and ride a bigger longboard.

Good wakesurfing requires a good size wave. For an outdrive to achieve that, the boat should not be planing and maintain its bow really high, affecting the visibility and maneuverability for the driver.

A direct drive or V-drive boat is required for creating such a big wave right behind the boat, one that can be ridden relatively safely.

Besides being designed as an inboard drive, a good wakesurfing boat typically has a flat bottom stern, deep and heavily ballasted so as to dig hard into the water and produce a big wake.

It will also generally have an extended gate on the transom, and tanks and bladders for pumping water aboard. This adds weight to the stern and on one side of the hull to create a bigger wake and skew it to the side where the wakesurfer rides.

Let alone the risks mentioned earlier, outdrive boats typically have standard V-shaped hulls which don’t create the kind of wave needed for good wakesurfing, A surf gate would need to be added as well as ballast tanks (or passengers) in the back and on one side to throw a bigger wake.

See this comprehensive article (external website) to learn more about setting up a boat for wakesurfing.

Do swim platforms reduce the risk of wakesurfing behind an I/O?

Some boat owners feel safer wakesurfing (without a rope) behind an I/O after installing a large swim platform or an extended back over the drive. They feel the overhanging platform recessing the outdrive provides good protection from a wakesurfer falling into the prop.

However, if the driver slows down or stops unexpectedly, because of the shape of these platforms and the height at which they are installed (above water surface), when hitting the platform the rider is likely to get pushed under toward the outdrive which sticks out 1-2 feet from the transom depending on trim.

Thus, even though having a large swim platform covering the outdrive may feel safer for wakesurfing close to a stern drive, the risk of getting hurt is still very high.

can you wakesurf behind a ski boat