Wakeboarding vs Wakesurfing: Which is Easier & More Fun? 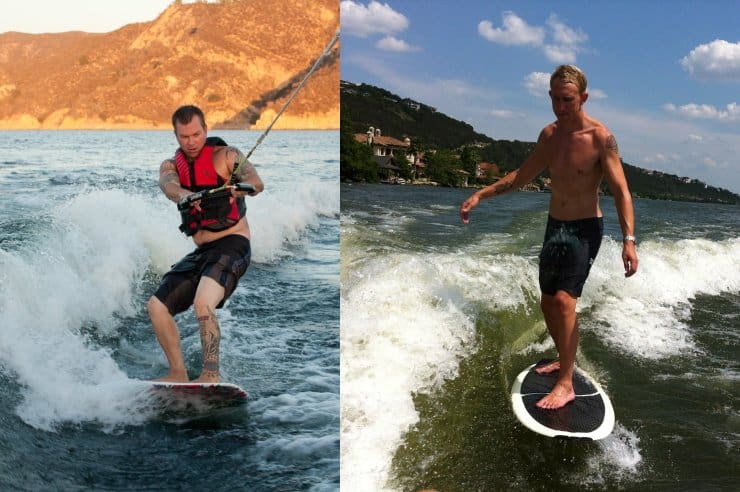 Wakesurfing is getting increasingly popular each year and constantly gaining traction compared to wakeboarding – wakesurf gear sales are on the rise while wakeboarding is declining.

More and more weekend riders now choose to surf behind boats on the lakes and swap their twin wakeboard for a wake surfboard or skimboard.

Why such a big draw in wakesurfing? Is it that different from wakeboarding? Is it easier to learn? Is it more fun?

The following table recaps the main differences between the two sports:

As its name implies, wakesurfing is is closer to ocean surfing (see this post for an in-depth comparison), which is itself extremely popular nowadays.

Compared to wakeboarding, wakesurfing is generally more mellow and accessible to all. It’s more beginner-friendly and doesn’t require mirror-perfect water – a little chop is usually not a problem for surfing behind a boat.

Comparing wakeboarding to wakesurfing is a bit like comparing kiteboarding to ocean surfing. In wakeboarding, you’re holding on to the tow handle and getting speed and momentum from the boat. Your goal is to draw powerful lines across the boat wake, carving or jumping from one side of the wake to the other (wake to wake).

In wakesurfing, your goal is to let go of the rope as soon as you get into the boat wave – which is generally bigger than for wakeboarding, an actual small wave you can ride.

Once you release the handle, your challenge is to remain in the wave behind the boat and maintain speed from the wave without losing it even though you’re no longer attached to the boat. This means you ride the wave very close to the boat, right behind it where the wave is the largest.

In wakeboarding, since you’re being towed all the time, the boat needs to drive faster, typically in 15 to 30 mph. In wakesurfing (no rope), the boat drives much slower, generally 10 to 12 mph.

Once you’re up on the boat wave, learning to surf is relativey easy, for most people a lot easier than learning to cross wake on a wakeboard.

In wakesurfing, your feet are free moving and not bound to the board and like on a wakeboard – wake surfboards often come with foam pads for barefoot riding. As a result, you can adjust your stance naturally.

This generally helps learners balance easier than on a wakeboard as they can place their feet as they wish without binding issues.

Besides the freedom from boot binding, as mentioned, wakesurfing involves lower boat speeds which gives learners more confidence and a more secure feel for learning. The falls are also less painful with less chances of getting hurt.

Wakeboarding vs wakesurfing: getting up

Both wakeboarding and wakesurfing involve getting up above the water by getting pulled up by the boat from a sitting/floating position.

Although the “deep water” waterstart is similar in both sports, it’s a little bit easier to learn on a wakesurf because your feet are not bound to the board, as opposed to locked in boots in wakeboarding.

You do need to actively keep the wakesurf board under your free moving feet as the boat pulls you so there’s a slight learning curve, which requires a bit of coordination. Many learners, however, get it on first or second try.

In contrast, getting up on a wakeboard can be challenging at first – it was for me. As a learner you may have a tendency to pull on your arms, extend your legs, or try to get up on your board too early, adding to the resistance.

Some learners, nevertheless, struggle a lot more with the deep water start on a wakesurf, as you must initially put your bare feet on top of the floating board while sitting in the water, then dig your heels into the board as the rope tenses up.

An alternative way of getting up on a wakesurf is to initially lie prone on it and pop up as the boat starts pulling. If the wave is large enough, you can drop the handle before getting up, otherwise, you hold on to the rope while you pop up.

Either way, this approach is much harder than the waterstart for a beginner- unless you’re using a big ocean surfboard. In wakeboarding, lying prone on the board is not an option since your feet are fixed to the board.

Another option for both sports is to sit on a pier with the board on the water and get pulled off by the boat. This is generally easier on a wakeboard since your feet are strapped in.

Due to the absence of boots/board bindings, the release of the rope after start, and the generally lower speed, wakesurfing is much easier on the body compared to wakeboarding . This is very similar to strapped vs strapless kiteboarding.

Most people are able to wakesurf for much longer period of times. Wakeboarding for 30 minutes involves a lot of strain on the arm and legs and many crashes. For many weekend riders this can translate into 3 days of intense soreness afterward.

In contrast, you might be wakesurf for 3 hours and only feel marginally sore in your legs for a short while after the session, assuming you’re in a decent shape. Most people only take 4 or 5 pulls on a wakeboard before quitting but can go forever on a wakesurf.

Many riders eventually switch from wakeboarding to wakesurfing due to back problems and knee and other joint injuries. Riding with no bindings and no tow rope puts a lot less stress on your knees, arms, back, and shoulders.

Wakeboarders also tend to do physically demanding tricks such as kickflips, shuvits, 180/360s, and airs. Since your feet are tightly bound to the board, bad landings are generally high impact. In contrast, doing an unconnected 180/360 on a wakesurf is much more forgiving on the body.

Another reason why wakesurfing has been gaining popularity vs wakeboarding is the new breed of wake boats which tend to produce a very strong wake. Ironically, these boats designed for wakeboarding tend to drive people away from wakeboarding to wakesurfing!

Top boats like the Nautique G23, often considered the mother of wakeboard boats, or the Malibu 22 MXV, generate massive surf wakes that are hard to reduce for mellow wakeboard riding.

These powerful wake boats make simple wake-to-wake carving more dangerous, as crashing on their huge wake has a lot more impact compared to smaller boats (Sea-Doos) used in the past for wakeboarding. A weighted direct drive makes a good enough wake for most beginner wakeboarders.

As a result, the wakeboarding crowd tends to shift toward cable parks, away from the boats which are increasingly used for wakesurfing instead.

The newer inboard boards are well-suited for wakesurfing – surfers ride very close to the boat so an exposed propeller would constitute a hazard, see this post.

Most wake boats come fitted with ballast systems for controlling the size ans shape of the wake. You can also add ballast bags to make the hull sit lower in the water and improve the wave.

Wake shapers can also be used along with ballasts to further improve the boat’s wake for surfing.

As mentioned earlier, wakesurfing is usually done at speeds of 10-12 mph. The goal is to achieve a clean hip-high wave with a green face. Boat acceleration for wakesurfing should be slower than for wakeboarding.

Wakeboarding vs wakesurfing board

Wakeboards are quite different from wakesurfs in shape and size. Wakeboards are symmetrical (twin) shaped with larger fins for good grip in the water at higher speeds.

The symmetrical shape of wakeboards is well-suited to switch riding and freestyle including surface tricks, spins, inverts, and air tricks.

Wakesurf boards, on the other hand, are generally directional and look more like surfboards (thinner and possibly longer e.g. 5′ to 6’3) or skimboards (wider and stubbier, often 4’5 to 5’5).

As mentioned, wakeboards require binding boots while wakesurfs don’t – they generally come with a rear traction pad for barefoot riding like a surfboard.

Check out the broad selection of wakeboards and wakesurfers on Buywake.com

Though close cousins, wakeboarding and wakesufing are very distinct. Both involve riding behind a boat, but the former is truly a tow sport while the latter is primarily about riding the boat’s wave.

Wakeboarding is about speed, tricks, jumping wake, getting air. Wakesurfing (particularly skim-style) also involves some flip tricks, but the primary goal is to surf the wave like on an ocean surfboard, pumping for speed, doing floaters, top and bottom turns, cutbacks, off-the-lips.

Wakeboarding and wakesurfing involve different types of boards (the former requires boot bindings), different kinds of boat and waves. Wakeboarding is increasingly moving toward cable parks while wakesurfing is taking on the lakes with the help of newer boats making powerful waves.

can you wakesurf with a wakeboard is wakesurfing harder than wakeboarding